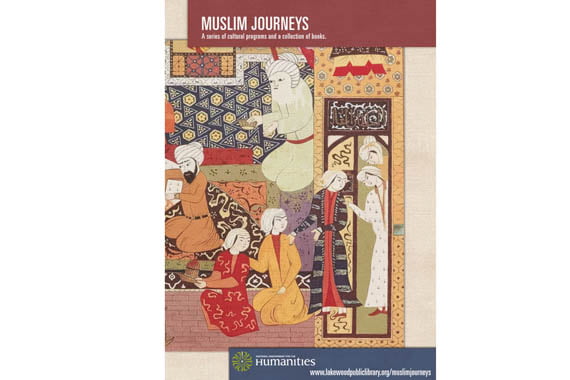 In existence since 2010 and headquartered in Columbus, The Turkish American Society of Ohio’s mission is to introduce Turkish culture into American Society. Through their efforts in dialog and unique community services they also seek to promote friendship and understanding between cultures. In his second year of working with this organization, Murat Gurer organizes a wide variety of programs to make sure their mission is upheld. These programs include Turkish Coffee Nights, breakfast, luncheons, forums and cultural activities as well as intercultural trips to Turkey. One of the latest efforts of Gurer and the rest of TASO Cleveland is their sponsorship of Muslim Journeys at the Library.

Muslim Journeys was brought to the Library in an effort to close the holes in the Library’s collection concerning the religion, culture, politics, literature and art of a billion of the world’s people. The recent gift of the Muslim Journeys Bookshelf (selected by the American Library Association and provided by the National Endowment for the Humanities) has done an amazing job in filling this gap and enriching the collection. With the support of the Turkish American Society of Ohio – Cleveland, the Library is able to also continue the journey with a series of lectures, films, concerts, poetry recitals and programs for children to enable the Library to share its knowledge with all.

Of Muslim Journeys and TASO Cleveland’s participation, Gurer has to say, “We hope that some of the misunderstandings and misrepresentations of ‘Muslims’ and the religion ‘Islam’ go away from our society. We know that not many people know about Islam and it is our responsibility to introduce it and present it in a right way.”

Two of the Muslim Journeys programs will be taking place at the Turkish American Cultural Center located at 13303 Madison Ave. The first of these will be a book discussion with Dr. Jonathan A.C. Brown on his book, Muhammad: A Very Short Introduction on Friday, October 4 at 6:30 p.m. Brown is the Associate Professor of Islamic Studies and Muslim-Christian Understanding at Georgetown University. His volume is a superb introduction to the major aspects of the founder of Islam’s life, providing both Muslim and Western historical perspectives. The second of these will be held on Saturday, October 12 at 1 p.m. and will be a lecture entitled Hizmet as a Contemporary Muslim Spiritual Renewal and Social Reform Movement by Dr. Scott Alexander, Director of Catholic – Muslim Studies at the Catholic Theological Union. The Gülen or Hizmet movement is a non-political service group that grew from a handful of students, teachers and businessmen in Turkey during the late 60’s to inspire millions of adherents from around the world. Its basic principles stem from Islam’s universal values such as love of the creation, sympathy for the fellow human, compassion and altruism. Dr. Scott Alexander will trace the history of the movement and discuss its considerable impact on the world today. Both of these programs include a tour of the Turkish American Cultural Center as well as light refreshments.

“As an organization, our vision is to build and sustain a peaceful and friendly community with strong intercultural ties among individuals and respect for all the religious and ethnic background through communication, interaction, education and diversity. We are part of this society and would like to be active and productive citizens,” says Gurer.

In keeping with that vision, TASO also takes part in community service projects such as serving meals, helping local food banks, visiting shelters and senior’s homes. Gurer also notes, “TASO is open to everyone, regardless of gender, race and ethnic background.” If you are interested in learning more about the TASO and the Turkish American Cultural Center you can call them at 440- 520-2269 or visit their website at www.tasocleveland.org. For more information on Muslim Journeys you can visit www.lakewoodpubliclibrary.org/muslimjourneys.