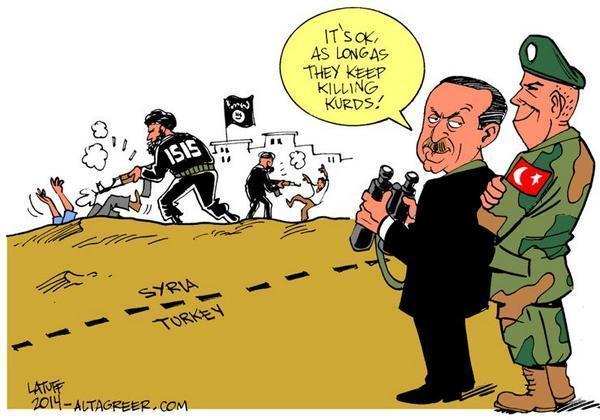 It’s not every country that has Santa Claus show up to kill nearly 40 nightclub patrons, but for Turkey, it was just another average day in President Erdogan’s world, where there were more than 30 major terror attacks alone in 2016. In his quest to destroy his political rivals, Erdogan’s policies are directly leading to this mayhem, which has spilled over to threaten the United States and West Europe.

In particular, Recep Tayyip Erdogan has sought to eliminate three enemies: Syrian President Bashar al-Assad, the Kurds, and the followers of Fethullah Gulen. In doing so, he enabled ISIS to emerge, attack his country, offering a pathetic response to terrorism that flows through his country, on its way to America and Europe. And it’s only going to get worse.

It’s well-known that Turkish President Erdogan and Syrian President Assad don’t like each other. When rebels opposed the Syrian regime during the Arab Spring, Erdogan either opened his borders to foreign fighters to join the rebels, or did little to stop them. That’s one of the sources of the movement that morphed into ISIS.

Erdogan could have realized his mistake, and worked to fight the Islamic State. But instead, he seems only capable of using his military to bomb the Syrian Kurds, the only group in the country able to give ISIS a decent fight.

Speaking of the Kurds, they were actually an Erdogan success story. When he was prime minister, he sought a dialogue with the Kurds.  Relations between the two groups improved. But that goodwill only lasted until the Kurdish political party HDP got enough votes to keep Erdogan’s political party (AKP) from winning enough votes to remake the Turkish constitution the way he wants it.

As a result, Erdogan called off the cease fire and attacked the Kurds. Now he’s seeking to arrest and imprison scores of HDP politicians. After the brutal attacks on Kurds, a new hardline splinter group, known as the “Falcons” have allegedly engaged in a bombing campaign. Whether it is this previously unknown Kurdish group or really ISIS launching the attacks is unknown, but with Turkish security in jeopardy, the last thing the country needs is this anti-Kurd campaign. Given that the Kurds have been battling ISIS in Syria and Iraq, targeting them only weakens the coalition against ISIS.

Finally, there’s the case of the Gulenists. Followers of this liberal U.S.-based cleric were scapegoated for the July 2016 coup. Tens of thousands of police officers and security officials were fired and even arrested, simply for being followers of Gulen, an opponent of ISIS.  New officers can either be planted by terrorists, or be too inexperienced to catch them. Erdogan supporters have even sought to try and figure out how to tie each terror event to Gulenists.

The Implications Of These Acts

It’s clear to everyone except for the most loyal Erdogan supporter that what’s followed has been a disaster. A Russian Ambassador was gunned down on television. Buses, airports, nightclubs and even the Blue Mosque make up the litany of targets. The Turkish President seems willing to blame everyone but ISIS, or even offer much of an anti-ISIS campaign. And who knows how many ISIS operatives have slipped through the country, or sought to inspire lone wolf or wolf pack attacks in the USA and West Europe.

America is at its least secure time since before Bin-Laden was killed in a raid by U.S. forces. It deserves to know why, and what could be done to stop this new wave of terrorism.

John A. Tures is a professor of political science at LaGrange College.  He can be reached at [email protected].