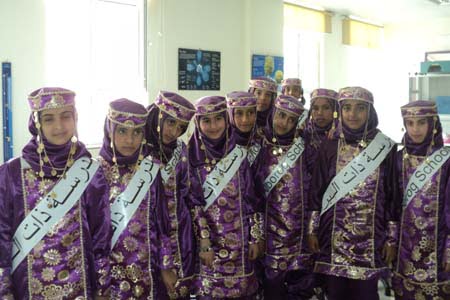 The Turkish School celebrated Culture Day on 25 April in the capital, Sana’a. The event had many cultures represented, including the Pakistani, Indian, Turkish and Yemeni cultures.

The Minister of Culture, Abdullah Aobal was present, along with several ambassadors.

Turkish ambassador Fazli Corman told the audience that “cultural relations between the two countries will promote a prosperous future. Turkey is eager to develop these relations.”

The Turkish School was established in 1998. There are separate campuses of the school. One is located in Sana’a, and the other two are in Aden and Taiz. The minister and ambassadors were thanked by the school for their participation and contributions.

The event included a dance performance by children from The Pakistan School in traditional Pakistani dress.

The show is about a dream bank. Children try to deposit their dreams, but the bank is closed. The dreams all revolve around the themes of education, cleanliness, disabilities and homelessness

“The message of the show is that children and their dreams are our future. We also had the opportunity to show the audience the traditional clothing of Haraz,” Alselwi said.

“We’ve celebrated the annual event every year for the past seven years,” he said. “Culture has no boundaries. The aim of Culture Day is to learn about each other’s heritage.”