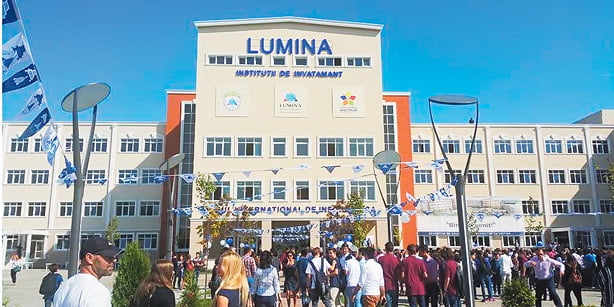 An inauguration ceremony for a Turkish school in Romania was held on Tuesday.

Calin Popescu Tariceanu, the president of the Romanian Senate, was the guest of honor at the inauguration ceremony of a Turkish school in Romania on Tuesday.

“I take pride in unveiling this school [run by the Lumina Educational Institutions chain], which has made a great contribution to our county with its success [in educating students],” Tariceanu said.

Fatih Gürsoy, the general manager of Lumina Educational Institutions in Romania, also made a speech and presented a plaque to Tariceanu.

Turkish schools have been opened across the world by the Hizmet movement — also known as the Gülen movement — a faith-based movement inspired by Turkish Islamic scholar Fethullah Gülen that promotes education with the aim of fostering interfaith and intercultural dialogue.

President Recep Tayyip Erdoğan declared the Gülen movement a “treasonous enemy” after a major graft investigation that implicated him and other top Justice and Development Party (AK Party) figures was made public on Dec. 17, 2013. Then-Prime Minister Erdoğan accused the Gülen movement of plotting to overthrow his government. He has since extended the crackdown beyond the borders of Turkey and has launched a campaign to close any institution, association or school he considers to be linked with the Gülen movement, including those in Europe, Africa and Asia.

However, many commentators have said that the campaign has merely damaged Turkey’s image in the international landscape. Erdoğan has also said he will carry out a “witch hunt” against anyone with links to the movement. The movement strongly rejects all allegations against it and no indictment has been brought against it.