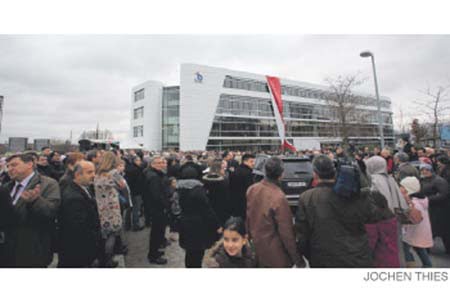 The new school building for the BiL Grammar School in Stuttgart officially opened in early January. The German-Turkish community turned out in great numbers to mark the occasion.

Driven by a sense that German state schools are failing them, many migrant communities are founding their own

A gray morning in January in the sleepy suburbs of Stuttgart. But in one part of the district of Bad Cannstatt, there are sudden signs of life: hundreds of people walking in the same direction; women and children dressed in their finery and most of the men in black leather jackets. They are all heading to the same place: a school.

On this particular Saturday, 6,500 people were hurrying toward a gleaming white, elegantly curved building: the newly erected Stuttgart BiL High School (Education and Information Centre or BiL, which translates to “knowledge” in Turkish). The organizers had expected 2,500 visitors – more than double that number came in the end.

In his opening address, Baden Wurttemberg’s State Premier Winfried Kretschmann described the school as a “thorn in the side of Baden-Wurttemberg’s school system.” What he meant by this is that most students at the BiL are the children of migrants, a cohort that often fails in German state schools. In Stuttgart however, these children graduate at high school level. “Why is it possible here and impossible everywhere else?” Kretschmann asked. The answer: supervision and classes during the lunch period as well as much more intensive individual support than is offered at state schools.

The school inauguration marks a high point in the efforts of the German-Turkish community to become part of Germany’s middle classes. According to its initiators, the facility is “a concrete manifestation of the fact that we have become accepted participants in this society”. Figuratively speaking, in less than 20 years they emerged from the basement boiler room of a large building, via the concierge desk to take their seat in the boardroom. A movement that began in large German cities in the 1990s with tutoring clubs came full circle in Stuttgart in 2011, as the first student at a German-Turkish high school of this nature gained their Abitur, or high school diploma.

There are now six such private schools across Germany. They are financed by school associations, run by second generation German-Turks and classes are taught by teachers with a multi-cultural background. They are taught in German in accordance with the curriculum of the respective state and religious studies have been abandoned in favor of ethics class. There are no prayer rooms.

Muammer Akin, executive director of the Stuttgart BiL High School, is typical of a new German-Turkish intellectual elite aligning itself with the teachings of Fethullah Gülen, a spiritual leader currently based in the United States. Gülen espouses dialogue between the religions.

Akin, a black-haired, slender and elegant man, was born near the Black Sea in 1969. When his parents went to live in Germany in the 1970s, he stayed behind with relatives. The family was only reunited 10 years later in Stuttgart – too late for Muammer to graduate from high school directly. He even had to repeat the 5th grade at a Hauptschule – a secondary school for students with low or average grades not expected to go on to tertiary education.

But he was nevertheless blessed with good teachers and instructors; one of whom encouraged him to help build a boat during his free time. The shy youngster came out of his shell and when he began a technical apprenticeship at the German multinational Bosch, his mentor talked him out of returning to Turkey. “You’ve become a different person,” he said.

With the help of his parents, Muammer went back to school and within three years he passed his school leaving exams and absolved a teacher training course. During this period, he joined a Stuttgart tutoring association for German-Turkish children and while sitting on the city’s advisory committee for foreigners, he met Wolfgang Schuster, who served for many years as Mayor of Stuttgart and who would later go on to support Akin’s school project.

The project was however essentially realized through the efforts of the local German-Turkish community. They donated a great deal of money and time to ensure the success of the €25 million ($34 million) venture. The building is anything but simply utilitarian – it has become a true landmark, a beacon of hope for German-Turks in their efforts to be assimilated into German society. But thus far, Germans have remained largely unreceptive to the idea.

Reservations appear to be especially strong – much more so than in the southwest of the country – in Berlin of all places, where the school association TÜDESB runs a secondary school in a former British tank barracks in the district of Spandau. The association purchased the enormous site from the state just a few months ago, and now plans to build a school campus there. In 2012, TÜDESB showed a turnover of €5 million, with 175 employees. Income from donations: €700,000. High school director Sabrina Leberecht is a pleasant, athletic native Berliner. Her parents were civil servants, but she’s no bureaucrat. “We are a multi-cultural hodgepodge”, she says over lunch in the school canteen, and joins her guest in dunking a serving of noodles into her plate of lentils.

She joined the staff in 2004 and managed to do what her predecessors couldn’t – to successfully conclude the school’s recognition process. This represented a significant step for the high school and its 400 students, as well as for the affiliated kindergarten. It meant that the association was entitled to receive state subsidies. It still has to find €25,000 a month for the elementary school, which charges tuition fees. A family sending three children to TÜDESB is likely to face a bill of up to €750 a month. In some cases, Turkish grandparents, who have returned to the home country after decades working in Germany, contribute some of their German pension to furthering their grandchildren’s education.

The Spandau high school is going from strength to strength, and is now offering scholarships to German students. To date, only three German families have made use of this offer, but perhaps this too will change over time.

These new schools offer migrants’ children the opportunity to move up the socio-economic ladder. And this could mean a bright future – as Muammer Akin said to the mayor of Stuttgart at the groundbreaking ceremony for his school: “Maybe one of our students will become your successor.”

– Jochen Thies is author of the book “Wir sind Teil dieser Gesellschaft” (We Are Part of This Society) due to be published by Herder in April 2013.