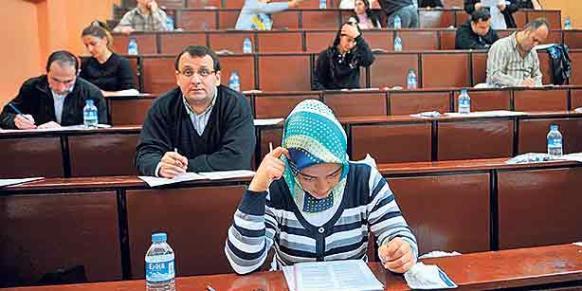 The Güven Preparatory Schools Owners Association (GÜVENDER), whose member institutions were blamed for issues of irregularities and cheating when the State Personnel Examination (KPSS) was administered in 2010, said in a strongly worded statement that they are being targeted so that the KPSS exam will be removed.

The Turkish ruling Justice and Development Party (AK Party) government has prepared an action plan to remove the obligation for candidates seeing positions in the civil service to take a competitive exam, according to a leaked document in the Taraf daily on Monday. The document details how the authorities are planning to remove the KPSS and replace it with an interview-based process, which would give an advantage to candidates with “references” from AK Party politicians.

The obligatory status of the KPSS — a standard exam for employment at the entry level in the civil service — was introduced during the term of late Prime Minister Bülent Ecevit in order to remove favoritism and nepotism in the government. The system has by and large provided equal employment opportunities in the civil service.

The allegations of cheating emerged in August 2010, when 3,227 people answered most or all of the questions in the KPSS correctly, a first in Turkey. Even though the exam was partially invalidated and a judicial investigation was launched, the AK Party parliamentary group, using its majority, was able to defeat the opposition motions to establish an investigation commission in Parliament.

GÜVENDER said claims that the teachers involved in the cheating scandal were from institutions linked to the prep school association is “absolutely untrue.” The association said suddenly putting forward such claims is aimed at removing the KPSS exams, defaming prep schools and influencing the Constitutional Court in its expected decision on the prep schools. GÜVENDER said many members of the current government and opposition, along with hundreds of scientists, businessmen and public figures, have been either educated at GÜVENDER prep schools or sent their children to them.

About 40 congressmen of Egypt Parliament visited the Salahaldin International Turkish School in Cairo. They had dinner at Turkish School with their families before their upcoming trip to Turkey. Turkish ambassador to Egypt Huseyin Avni Botsali hosted the dinner. Students of Turkish school sang songs in Arabic and in English after the dinner. Botsali mentioned […]