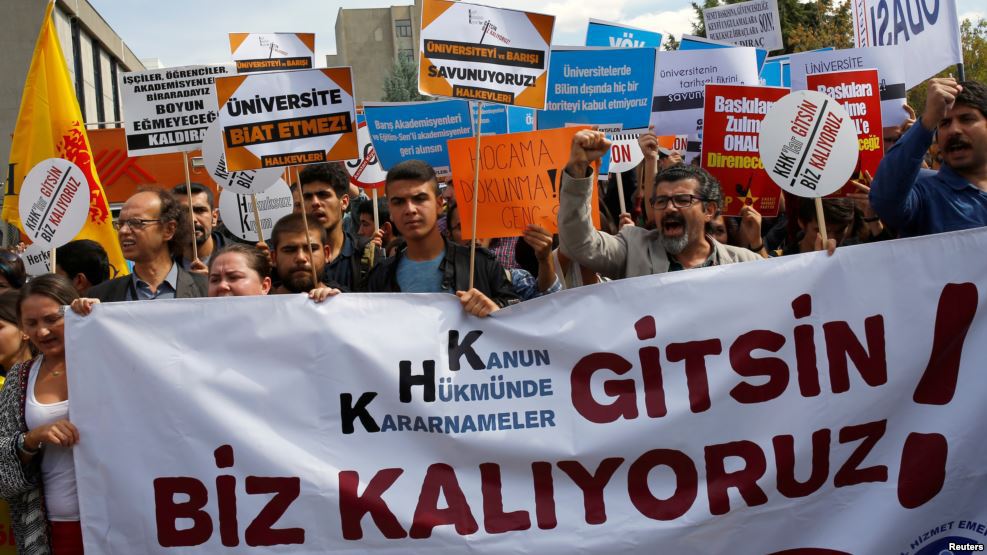 The organizations, which signed the memorandum, underlined the fact that Turkey has every sort of right to investigate the July 15 abortive coup and to find the responsible for the violent events accompanied the failed attempt.

While Turkey’s immediate act to invoke a state of emergency is legitimately understandable, the far-reaching and excessive powers exercised by the authorities during the first three months fuel concerns over the nature of the emergency rule and government decrees, the rights groups said in a joint statement on Oct 19, a day before extension of emergency rule began.

The statement came amid abundant claims of torture and mistreatment of prisoners arrested in the post-coup crackdown.

Recently, president of a prominent lawyers association in Turkey said people jailed as part of a government campaign against the Gulen movement have been subjected to torture in barbaric ways, and even rape, after meeting with lawyers, families, and visits to a hospital.

“They remove the nails of colleagues [during detention] at police stations,” Selçuk Kozagacli, the president of the Modern Lawyers’ Association (CHD) said. He added that he even saw people underwent a colectomy after objects inserted into their anuses at police stations and prisons.

More than a week after the coup, Amnesty International, which is among the signatories of the statement, released a report suggesting credible evidence of torture, mistreatment and even rape against those who were arrested after the coup.

“We call on the Government of Turkey to revoke the measures under the state of emergency, the application of which, in practice is incompatible with Turkey’s human rights obligations,” the Wednesday statement noted.

“At the very least, we urge the Government of Turkey to narrow the scope of the emergency measures by revoking provisions that enable human rights violations and are not consistent with Turkey’s obligations under international law,” the statement added.

It has also called on Turkey’s Western partners, the U.S. and the EU, to publicly condemn human right violations in Turkey.

The statement, in a detailed fashion, elaborated on the dismal state of media, given the fact that 130 journalists are behind bars as of Oct. 19, and 2,300 journalists and media workers have been left without a job after government shutdown of more than 150 media outlets since the July 15 coup.

The detainees have been denied to access to choose their lawyer under pressure of authorities, have limited right for visits by relatives and endure tremendous difficulties in dire conditions of detention centers.