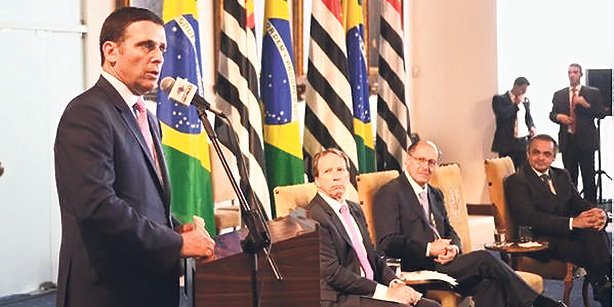 Jose Americo is seen speaking at an official ceremony on Friday held as part of a “Turkish week” in Brazil. (Photo: Cihan)

Mozambican President Filipe Nyusi has expressed his support and gratitude to the educational volunteers affiliated with the Gülen movement for their contributions to his country, saying that he has scheduled a visit to the Turkish school in the Mozambican capital Maputo that his son graduated from to show his support.

“The Turkish schools in my country are enshrined in my people’s hearts. You can simply see me as a co-partner and a strong supporter of these schools. I want to make it clear — I have always supported Turkish schools [in Mozambique] and I will continue to support them,” Nyusi said during a meeting with the managers of several Turkish schools in the country’s presidential palace, in what can be seen as a challenge to Turkish President Recep Tayyip Erdoğan’s call for the closure of Turkish schools operating in African countries.

The Turkish schools in Mozambique are considered by many to be the most prestigious secondary education institutions in the country. The children of the country’s leading figures, including President Nyusi, the foreign minister, the interior minister, the gendarmerie commander, many police chiefs, diplomats, UN representatives and foreign ambassadors receive their education at these schools.

Mozambican Defense Minister Atanasio Salvador M’tumuke has stated that he sees himself as one of the founders of the Turkish schools in Maputo because he donated land for the construction of the first Turkish school in Mozambique. M’tumuke, who is also the honorary president of the Söğüt Turkish schools, has also praised them for the high-quality education that they provide in his country, specially thanking Turkish Islamic scholar Fethullah Gülen — the inspiration behind the Gülen movement, also known as the Hizmet movement — for encouraging people to invest in human capital in Mozambique.

“Everybody can be certain that I support these schools. They are the guarantee of our future. Our country and our people will eventually develop through education,” Nyusi stated at the meeting.

Erdoğan declared the Gülen movement a treasonous enemy after a corruption scandal implicating people in his inner circle erupted with a wave of detentions on Dec. 17, 2013. He openly declared last year that he would do whatever it takes to eliminate the “parallel structure,” a term he invented to refer to alleged sympathizers of the movement within the state bureaucracy, even if this requires a “witch-hunt.”

He has since extended the unflinching crackdown on the movement beyond the borders of Turkey and has launched a relentless campaign to close any institution, association or school he considers to be linked with the Gülen movement wherever it might be located, be it in Europe, Africa or Asia.

However, the campaign against the schools has had no repercussions abroad apart from the fact that Turkey’s image in the international landscape has been negatively affected by the government’s initiative. The most recent example of the government’s failure to close such schools was in Albania, whose president, Bujar Nishani, dismissed Erdoğan’s call to close the country’s Turkish schools. “In my view, the Gülen schools pose no threat to either Albania or Turkey. Therefore, the closure of those schools is out of the question,” the Albanian president said in a televised interview aired on local TV station Ora News on May 18 in a response to earlier comments by Erdoğan in which he accused the schools of acting like a terrorist organization.

Turkish schools established by educational volunteers affiliated with a movement inspired by the teaching of Islamic scholar Fethullah Gülen were welcomed and praised by Brazilian politicians during an official ceremony on Friday that was held as part of a “Turkish week” in the Brazilian city of Sao Paulo’s state assembly.
Taking the floor in the assembly, deputy Jose Americo mentioned the “surprising success” of the Turkish schools and said that their example should be followed. Addressing Turkish educators and entrepreneurs, Americo added, “I encourage you to open up more schools in my country.”

Praising the Turkish schools in Brazil, Americo said: “I have personally witnessed the success and the high principles of these schools [in Brazil] when I visited these educational institutions. I was informed that hundreds of these schools were already established in Turkey and the Americas. This is something amazing and an example we should all follow.”

Supporting his colleague, Speaker Fernando Capez and said that the state assembly’s doors were always open for the Turkish community. In a brief interview after the ceremony, conveying a “message for the president of Turkey,” Capez was recorded as saying, “Europe is ready to embrace you [Turkey]. We [the country of Brazil] are ready to embrace you. [However,] there is only one detail that obstructs this. Let us strengthen [Turkish] democracy and put an end to this story [of anti-democratic attitudes] so that Turkey can reach the level it deserves among world leaders.”