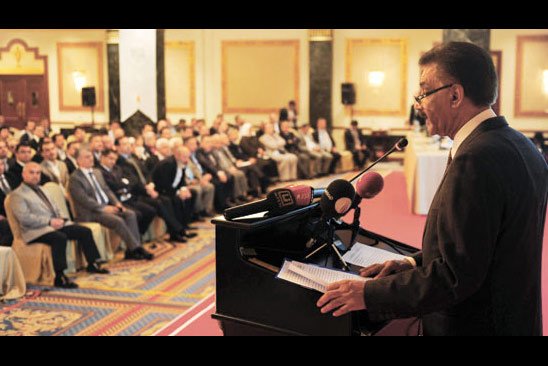 UN Resident Coordinator in Turkey Shahid Najam was one of the speakers at Thursday’s Journalists and Writers Foundation (GYV) conference in İstanbul. (Photo: Today's Zaman)

Representatives of Turkish-run nongovernmental organizations from 80 countries, established by people inspired by Turkish Islamic scholar Fethullah Gülen’s teachings, have shared their experiences of intercultural and interfaith dialogue during a three-day meeting organized by the Journalists and Writers Foundation (GYV).

İstanbul hosted the “Second* International Experience Sharing Conference of Coexistence,” attended by Hizmet Movement NGOs from 80 countries along with many businessmen, journalists and representatives of Turkish nongovernmental organizations. Representatives from various NGOs showed video presentations about the activities they conduct in their countries to promote intercultural or interfaith dialogue. The importance of establishing dialogue with people from different cultures, races, languages or religions was promoted during the GYV meeting.

GYV President Mustafa Yeşil delivered the opening speech at the meeting, highlighting the importance of dialogue, saying the word is frequently used in Turkey but that its meaning is not fully comprehended. “In fact, we are currently experiencing a time in which we urgently need actual dialogue, not just talking about the word itself. We [referring to all representatives of the Hizmet movement, which includes followers of Islamic scholar Fethullah Gülen’s principles] have never used the concept of dialogue for intentions such as bringing anybody into the fold or persuading anybody to adopt our religion and we have never used it within any strategy at all,” Yeşil said. “Dialogue is a concept and a lifestyle. We have never given up our values while establishing dialogue with any person and we have also not wanted people to abandon their own values. We just tried to understand opposing values and ideas, we got the chance to introduce ourselves and then we met, we reached a compromise, we banded together and waled together.”

Yeşil said the public has been acquainted with the Hizmet movement for 40 years. “Hizmet is an education and human-based movement that emerged between 1991 and 1992 in the country and was institutionalized abroad in 2000. It runs nongovernmental organizations in around 140 countries. The movement is based on intercultural dialogue and cohabitation in peace,” Yeşil noted.

The UN’s resident coordinator in Turkey, Shahid Najam, who also delivered a speech during the meeting, praised the GYV and congratulated the association for its new NGO status as an affiliate of the United Nations Economic and Social Council (ECOSOC), adding: “The wide spectrum of issues of global, regional and national significance, which the association engages in and promotes dialogue on is indeed commendable and will definitely enrich the global knowledge, exchange good practices and strive at consensus building — a goal which the contemporary world needs to achieve on an urgent basis given the enormity of challenges, chaos, disorder and dissensions afflicting the world.”

Stating that the aim for establishing a global dialogue constitutes an important part of UN policies, Najam said: “The United Nations mandate derives from three main pillars — international peace and security, development with equity, and respect for human rights and dignity. All three are inextricably interrelated and constitute the core of the topic we are discussing today. It is engraved in the UN Charter and in several UN resolutions and declarations.”

Stating that Turkey historically represents an amalgam of East and West, a blend of civilizations, and is widely acknowledged as a land of tolerance, Najam said that Turkey is a testimony of peoples living together throughout the ages and inspires many nations in their quest to achieve a democratic, coherent and just social order.

Noting that the world’s problems, such as violence, racism, xenophobia, Islamophobia and hate crimes, all stem from intolerance, Najam said: “No matter how pessimistic the landscape may seem, it is our foremost obligation to respond proactively to the tensions and work collectively to replace instability with stability, hostility with hospitality, and animosity with alliance. In this regard, allow me to once again recognize the laudable efforts of the Writers and Journalists Association for this genuine intercultural engagement through this forum for peaceful coexistence.” He added: “We should remember that tolerance is liberating; it does not mean indifference or simply recognition. It is an act, whereby not only the differences of others are recognized but also the riches of other cultures are valued as the wealth of all. Mutual respect serves as a moral compass to ensure inclusiveness. Likewise, tolerance empowers individuals, frees communities and provides the foundation for genuine peaceful coexistence.”

Ethem Sancak, chairman of the Hedef Alliance Group, praised Turkish schools run by private entrepreneurs around the world and described members of the Hizmet movement, who are trying to spread inter-cultural dialogue around the world with their peace-based activities at Turkish schools, as “Alperenler” (brave men) who promote tolerance and mutual understanding across the world.

The Niagara Foundation, which operates in nine US states with 52 branches in the country, gave a presentation to show the activities they conduct to establish intercultural and interfaith dialogue in the US. In the presentation, the foundation highlighted their numerous events to promote dialogue between Armenian and Turks in the US, two communities that have had long-standing problems with each other for over a century. A great applause erupted when a friend of Armenian-Turkish journalist Hrant Dink, who was fatally shot outside the Agos weekly’s office in İstanbul in 2007, said during an interview on the video, “If Hrant were alive, he would also want to solve all the problems together.”

Also at the meeting, a student from Afghanistan, a country that has suffered from civil wars and violence for many years, said the Afghan people did not know whether people can coexist and understand each other by establishing dialogue, but the Afghans learned the importance of dialogue and mutual understanding thanks to their teachers working in private Turkish schools in their country.

Turkish-run nongovernmental organizations of 10 countries out of the 80 countries that attended prepared short video presentations that were shown during the meeting.

ÖZCAN KELEŞ* Fethullah Gülen is many things at once and it is this combination of characteristics, abilities and qualifications, some of which have hitherto seemed mutually exclusive, that marks him out from the rest and has provided him with a transformative edge. It is the combination of three particular characteristics that have enabled Gülen to […]