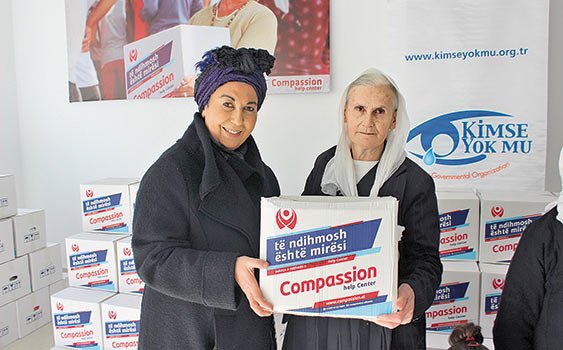 Kimse Yok Mu, Hizmet’s Relief organization, is continuing humanitarian aid efforts in Europe in addition to hundreds of other countries. One of the last example of its work is the vocational training center for the women in need in Albany. Miniature artist Gunseli Kato’s name has been given to the center because of her contributions. The vocational training center is a joint project of Kimse Yok Mu, Turkey, and Compassion Association, Albany. Speaking at the opening ceremony, Ms. Kato expressed her feelings: “I was surprised when I came here. I did not expect a result like this. This [center] made me so happy.”

By the help of this center numerous women  including many widows in Albany will have professions. Training in twenty different professions will be offered at the center, which consists of workshops and sales rooms. Trainees will get economical benefits through sold items at the center that aimed to reintegrate women into the society.

Gunseli Kato in her speech explained how she was involved in the opening of the center. She pointed out that her daugher travelled to Sudan with Kimse Yok Mu,  and said, “After she spent 5 days in Sudan, she became a totally new person. She told me everything she experienced. I was impressed by what she told me and decided to take place in these beautiful efforts.” She added that she would be supporting the center by teaching here from time to time.

Dr. Blendi Cekrezi, the chairman of the board of directors of the Compassion Association, said that a self oriented life has taken over in the world. He added that people living in difficulties in different parts of the world are ignored and by establishing this center they aimed to support every single needy Albanian brother and sister and satisfy their needs. He also said that “By these training programs we aim to reintegrate widows, orphans and homeless people back to society”.