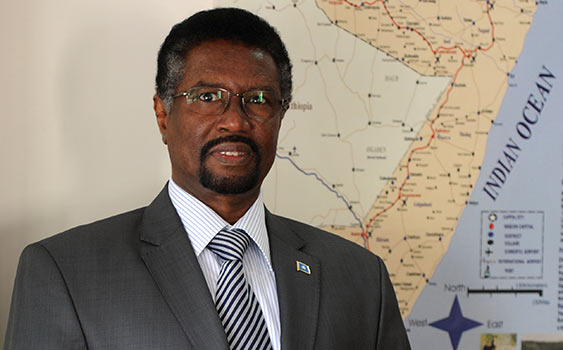 The Somalian Ambassador to Ankara called Turkish aids to his country as heroic. He stated that donations and charities contributed to the stability of the underdeveloped country of the Horn of Africa.

Somalia, which is trying to relieve with Anatolian aid campaigns, thanks to Turkish people. Somalian Ambassador to Ankara, H.E. Mohamed Mursal Sheikh expressed his gratitude for the aid campaign organized by Turkey at Eid ul-Adha. He said: “We experienced the true Eid al-Adha by your friendship and great support.” Mursal remarked that during the Eid he felt as if he was at home, due the religious and cultural similarities between the two countries. The Ambassador also praised the Turkish Schools in Somali, and stated that his kids have started these schools.

Somalia Ambassador made a statement to Zaman regarding Eid ul-Adha. Mursal underlined that his country and people see Turkey as a sincere, powerful and close ally. “In the last three years his people and country received legendary aid from Turkey in different areas such as political, diplomatic, financial, and military”, he said. The high-rank diplomat claimed that contrary to the general perception Turkish aid is not limited to relief activities such as food, clothing, and medical equipment. He said, “Turkish aid is crucial to sustain stability and obtain prosperity.” Very few countries have embassies in Somali due to the fundamentalist terror activities, and Turkey is one of those countries. Al-Shabaab militants attacked Turkish diplomatic mission and killed a special operation agent on 27th of July, 2013.

The envoy reminded that August 19th has been announced as the “Turkiye Day” in remembrance of Prime Minister Tayyip Erdogan’s visit to Somalia on 19 August 2011. “This is a sign of our great relationship. Prime Minister Erdogan’s trip has changed the destiny of Somalia,” he stated. “Erdogan’s trip to Somalia with his family and high rank officials was very crucial for our people and this gave us hope and energy,” he said.

Mohamed Mursal Sheikh also praised the schools founded by Turkish entrepreneurs in his country. Mursal told that Mogadishu government’s “Let’s Go to School” campaign aims to provide free education for 1 million children, and this way they would be able to solve persisting problems in the society. “Turkish schools provide high quality education for our kids,” the diplomat hailed.