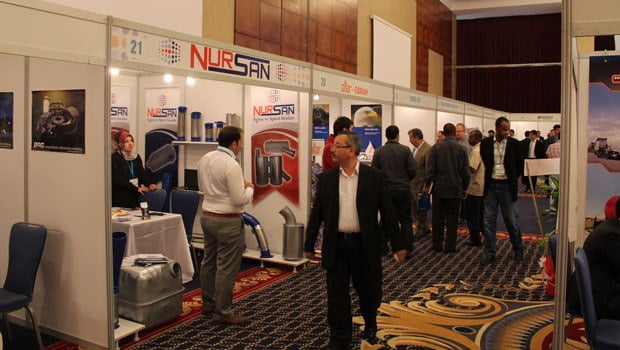 ISTANBUL
Representatives of automotive manufacturing companies from 27 countries were in the city of Konya on Tuesday to participate in a trade and investment summit organized by the Turkish Confederation of Businessmen and Industrialists (TUSKON).

As part of its Turkey-World Trade Bridge series, large-scale trade and investment summits organized by TUSKON since 2006, the confederation brought together 170 automotive firm representatives from around the globe to discuss opportunities for investment with 150 Turkish counterparts in Konya on Tuesday.

The 27 countries attending the TUSKON summit import a total of $80 billion per year — making them a lucrative market for the Turkish auto supply manufacturing sector, which sells 73 percent of its production to overseas markets. Pointing to this fact, TUSKON Deputy Chairman Ahmet Coşkun said in his opening remarks on Tuesday at the Konya summit that the confederation expected the meeting to pave the way for long-term investment and trade agreements between Turkish and foreign companies.

Emphasizing that the Turkish automotive supply industry has improved its standards and its production quality considerably over the past decade, Coşkun told Tuesday’s audience that the country’s automotive sector — auto manufacturing and the auto supply industry combined — exported goods worth $21 billion in 2013, 16 percent of total Turkish exports that year. This makes Turkey the world’s 16th largest motor vehicle manufacturer, Coşkun said, adding there are more than 1,000 Turkish auto supply manufacturers and 400 of them have strong export performance.

The Turkish auto supply industry exported products worth $9 billion in 2013 and 69 percent of that went to EU countries. The target markets represented at Tuesday’s summit were mostly emerging countries, a sign of TUSKON’s efforts to diversify the supply industry’s export markets, Coşkun added.