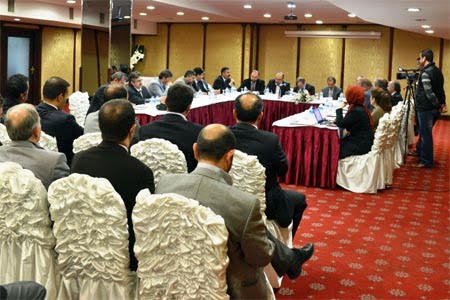 The Journalists and Writers Foundation Intercultural Dialogue Platform organized a panel entitled “An Experience of Co-Existence: The Example of Istanbul and Şanlıurfa”, which took place in the city of Şanlıurfa. Religious representatives from the Armenian, Jewish, Assyrian, and Catholic communities expressed their thoughts on Turkey opening its doors to dialogue.

The panel brought together the opinion leaders of Şanlıurfa and representatives from the media alongside the Armenian, Jewish, Assyrian and Catholic religious representatives. One of the things that were pointed out in this panel was the fact that there had been a period when Turkey had been attempted to be molded into a certain standard. However, in the last twenty years, Turkey had started to break free from this standardization.

The meeting was held at the El Ruha Hotel. The City Administrator of Religious Affairs and the opinion leaders of the region also attended the meeting. Owners of TV channels and a group of writers from throughout the city participated in the panel, where thoughts on the Kurdish issue and the current process for peace were expressed. The meetings were realized in an atmosphere of mutual love and respect as the acceptance of differences as richness was emphasized. Some religious representatives brought up the issue of the works of art pertaining to their faiths having been eradicated in the region. Upon this, Sabri Dişli, a local writer from Şanlıurfa, stood up to apologize to the Armenian and Assyrian representatives. “We cannot even show you a gravestone that belongs to you,” said writer Dişli as he underlined the fact that he considered this to be an embarrassment.

“If Your Neighbor is Uncomfortable then You Cannot be Comfortable Either”

The Vice President of the Journalists and Writers Foundation, Cemal Uşak, served as the moderator in the panel and initiated the meeting with his opening speech. Sahak Mashalian, deputy to the Archbishop Aram Ateshian, the patriarch of the Turkish Armenians, also spoke at the panel and stated that the JWF was bringing about a quiet revolution in Turkey. “The Journalists and Writers Foundation has carried out a quiet revolution in Turkey. Nowadays, interreligious dialogue is deemed normal. However, it wasn’t always the case,” he spoke.

Conveying that we must learn from our past, Mashalian stated that we now stand at the point where “we must learn to respect each other”. “If your neighbor is uncomfortable then you cannot be comfortable either,” said Mashalian, and added, “We learn this, even though it may be bitter. The developments in the Kurdish issue have given us hope.”

Defining the Intercultural Dialogue Platform as the platform where people understand and respect each other without getting hurt, Mashalian elaborated using these words, “These experiences give us the opportunity to really get to know the people whom we know only theoretically, by gathering us all around a dinner table. My prejudice is overcome thanks to these meetings; even a single day has changed my views. The JWF is realizing a quiet revolution in Turkey. Peace happens through sharing the same table, the same platform, through shaking hands and being able to look each other in the eye without any shame. Despite many reactions, the JWF has been able to find a way to do this.”

“We Are Living and Being Made to Live With Prejudice”

Izak Kolman, the Advisor for the Turkish Jews Chief Rabbi, recorded that the Jews who had been able to work in various fields including high-rank military positions and serving as judge in criminal courts during the time of the Ottoman Empire had later on been marginalized, tying that to a lack of dialogue. “We are living and are being made to live with prejudice. A wall is built in between, making us “the other”. This dialogue between members of different religions and faiths started in 1995, and I do believe that, from now on, everything is going to be much better,” said Kolman.

The President of the Assyrian Catholic Church Foundation, Zeki Basatemir, expressed that during these times of both conflict and peace, they all shared this land and that their doors were always open to their brothers. Basatemir related that he was hopeful of the processions on peace and the works and events centered on dialogue, and underlined the fact that they carried excessive hope on not labeling certain groups as “the other” anymore.

“Dialogue is Much More Beneficial than the Best of Wars”

“The Assyrians taught us about philosophy,” said Ihsan Açık, the Administrator of Religious Affairs for the city of Şanlıurfa. He related how he made a point to thank them for this every time he visited the Assyrians. Açık continued with these words, “Şanlıurfa is a very rich city in terms of the prophets who lived here, in terms of the culture, so long as we get to know and understand each other. Dialogue is more beneficial than even the best of wars. We are going to engage in dialogue, we are going to be neighbors, we are going to understand each other, it all comes down to what we choose to do.”

Bahaddin Ulusoy, Vice President of the Edirne Gypsy Association, brought up a point stating that 73% of the population in Turkey did not want to be neighbors with the Gypsies. In his speech he also stated, “We are all human beings. If we can achieve to be true human beings, I believe that the rest will follow after that. We are hoping for a more peaceful progression after this point. We value education greatly and believe that with education we will find solutions to our problems today.”

“Islam is the Religion of Compassion”

Throughout his speech, Mollah Sabri Yazar, a teacher of Islamic theology, emphasized the fact Islam is a religion of unity and compassion. Yazar pointed out that Islam orders humans to live together as one and to treat others kindly, and used the Ottoman Empire as an example. He said, “We must strive to live in peace as it had once been in the period of the Ottomans. Our duty is to teach the next generation to treat human beings with kindness and to be understanding of one another.”

“The Alawites are Still under Oppression”

Ali Eröz, Mayor for the town of Kısas, a part of the city of Şanlıurfa, joined the meeting as representative of the Alawites. He called attention to the fact that a total of 7 workshops have been organized by the current government regarding their issue. Eröz claimed that there hasn’t been any sign of progression. He said, “In the same way that I respect the beliefs of another, I expect to receive the same respect from them.”

Uşak, Chairman of the meeting, objected to a certain part of Eröz’s words, saying that he himself had attended two of the 7 workshops that the government had organized and that the efforts of those who were working hard for a solution must be acknowledged. In addition, he mentioned the fact that one must truly be insistent on their rights and freedom.

The Governor of Şanlıurfa Welcomed the Platform Committee in his Office

The “Experience of Co-Existence Panel” is traditionally held in a different city each year. This year the members of the Panel Committee travelled to Şanlıurfa and were greeted with a sincere welcome by the government dignitaries in the city. The committee visited the Governor of Şanlıurfa, Celalettin Güvenç, in his office, where they exchanged ideas on the subject of “Co-Existence”.

The meeting was held in the Meeting room of the Governor Office. Uşak, Vice President of the JWF informed Governor Günenç on the different projects that have been organized by the Platform.
Later in the day, the committee visited the Mayor of Şanlıurfa, Ahmet Eşref Fakıbaba, in his office and received information on the city.

The committee then went on to visit the important landmarks in the city of Şanlıurfa, including the “Pool of Sacred Fish” where the cave in which Prophet Abraham was born is also located, Rumkale, Göbeklitepe, and the towns of Halfeti and Hilvan.

The committee had the chance to experience the hospitality of Şanlıurfa. A “sıra gecesi” (a local traditional entertainment) program and “family house” visits were organized.

The Rumi Forum, an international organization promoting interfaith dialogue and peace, presented awards celebrating peace and dialogue initiatives at their annual Peace and Dialogue Awards ceremony in Washington on Tuesday. Bishop Desmond Tutu’s daughter Naomi accepted the Extraordinary Commitment to Dialogue and Reconciliation Award on behalf of her father, which she said her father accepted as a great honor.