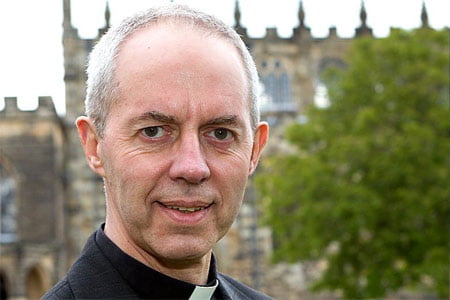 I heard from some of my clergy friends that they chose to become pastors because they responded to God’s calling. In fact, you may hear from any person God has called to pursue a certain mission; he/she responds to the calling so as to become a good servant of God, serving God’s creation in the way God wills it.

When I heard Bishop of Durham, UK, the Right Reverend Justin Welby, was named the next Archbishop of Canterbury (1), people who responded to God’s calling passed before my eyes – people of any faith or mission such as Martin Luther King, Gandhi, Fethullah Gulen, Mother Theresa among others.

I congratulate Bishop Welby on his new position and wish him success.

Bishop Welby’s appointment to the highest position of the Church of England is noteworthy, as he sincerely responded to God’s calling, leaving his successful career in oil business to become a clergyman.  As an oil executive, Bishop Welby was earning a six-figure salary back in 1987 but gave it up to train to be an Anglican priest. He took a degree in theology at Cranmer Hall in Durham, where he studied from 1989 to 1992 with an emphasis on business ethics. “I was unable to get away from a sense of God-calling. I went kicking and screaming but I couldn’t escape it,” he says. (2) His life-changing decision followed a personal tragedy that occurred in 1983. He lost his seven-months-old daughter Johanna in a car accident. He remembers “It was a very dark time for my wife Caroline and myself, but in a strange way it actually brought us closer to God.” (3) He and his family had to live on the stipend of a junior clergyman after this substantial decision.

Bishop Welby was also appointed to the parliamentary commission on banking standards, which is looking into the Libor rate-fixing scandal. He has also written extensively on business ethics, including a 1992 book “Can Companies Sin?” according to BBC. (4)

We, human beings, are created with qualities to respond to God’s calling; God expects his creation to follow his calling. If his servants do not hear his calling, He may remind them through incidents similar to the one when Bishop Welby lost his daughter.

However, there are some other people; not only they respond to God’s calling themselves but they also help others open their hearts and minds to an awareness of God’s calling. They dedicate their lives to this mission – awakening people to God’s calling.

Fethullah Gulen is one such person in my humble and perhaps subjective opinion. Gulen-like people call us to respond to the calling unconditionally. Remember how our forefather Abraham responded unconditionally. For Abraham, openness to God’s calling was unconditional.

Gulen realized God’s calling at an early age, perhaps when he was a teenager or even before. We clearly observe that he never had a self-centered or egotistical plan. He also never thought about even living a standard life, such as getting married, having property, gaining position, material or spiritual.

Gulen encouraged and inspired people that they must listen to God’s calling. That is, they must feel the responsibility for humanity on their own shoulders. Awakening to this reality and listening to Gulen’s advice, they gained a habit of ‘giving generously’ and established educational institutions starting 1970s, began intercultural dialogue activities in 1990s and launched projects to help the poor and the needy in 2000s.

Those who have listened to Gulen’s audiocassettes recorded in 1970s will remember many examples of the ones who responded God’s calling. One of them is Fethi Baba. He used to sell lahmajoun (very thin and spicy Turkish pizza) in his street-cart. He was in the circle of Gulen’s close friends.

Seeing Gulen’s ambition to help the poor students, he approached Gulen one day and said, “I built two small homes by selling lahmajoun. Now, I would like to donate one of them for students’ use. Students will stay there for free.” He was a person hungry to do good deeds, Gulen comments. He did what he wished. Perhaps this good deed caused him to be thrilled with the feeling that he might have pleased God.

He approached Gulen six months later with another proposal. He said, “You know, there is a little garden in front of my home. I want to donate it to build a dormitory for students.” Gulen liked his sincere intention but said, “You know people have already undertaken 6-7 projects and constructions are going on and they give scholarships to hundreds of students; how can they embark upon another project?”

Gulen realized Fethi Baba was determined to fund dormitory’s construction, all by himself. ‘Selling lahmajoun on the streets’ was his only way to pay for it. He was able to finish the dormitory in less than a year. He donated about 90 percent of his earnings. Supporting education of the youth had become his life’s mission.

Gulen movement is the movement of such people; people who answer God’s calling.

There are many cases like the case of Fethi Baba within Gulen movement alone. There are people all over the globe in all faith traditions who respond to God’s calling, saying, “Yes, Lord” or “Here I am at Your service, O Lord, here I am.” I salute all of them.

As we see in the cases of Bishop Welby and Fethi Baba, responding to God’s calling changes one’s life significantly in a positive direction.

Back to Bishop Welby. As a person active in interfaith dialogue, I wonder how the new Archbishop could contribute to peace and reconciliation efforts between Christians and Muslims. John Campbell of Council on Foreign Relations offers an answer to my question: “Bishop Welby worked closely with the current archbishop of Canterbury, Rowan Williams, as his special envoy to Africa, to keep the communion together. The new Archbishop knows personally the challenges of Africans, argues Campbell.” (5)

According to Bloomberg (6), he visited Nigeria seventy times. He has been deeply involved in peace and reconciliation work in the Niger Delta, and in the predominately Islamic north where there is a possibility of a widespread conflict between the Muslim and the Christian groups. He is a person who places a premium importance on listening, says Campbell; He has the confidence of some Muslim leaders. Campbell continues, Bishop Welby’s understanding and sympathy for Islam has promoted dialogue between the two religions, and those Muslim religious leaders will talk to him when they are usually unwilling to talk to other Westerners. (7)

I hope that he will focus on interfaith dialogue and peace efforts as much as he focuses on issues of the church.

I congratulate once again Bishop Welby on his new appointment.

May Peace be with all who respond to God’s calling.

Levent Koç* is former director of the Peace Islands Institute.

In a recent Conference of Jesuits Among Muslims in Rome (September 2011) presenting his views on Hizmet movement, Prof. Thomas Michel, SJ of Georgetown University, Washington concluded: “‘Are Gülen and the Hizmet community friends or foes?’ I must answer that they are our friends. They are the kind of Muslim interlocutors for an active dialogue […]