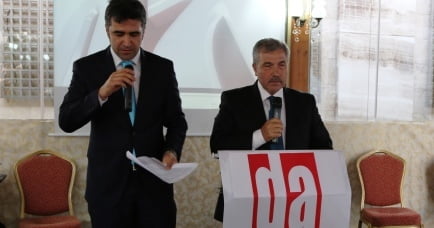 A reception was held to commemorate the 15th anniversary of establishment of the Dialogue Eurasia Platform (DAP). Speaking during the ceremony, Co-Chair Harun Tokak said: “There are three forms of human relations: speaking, being indifferent and fighting. The DAP opted for speaking. Going from one country to the other, it called on people to establish dialogue.”

It has been 15 years since the DAP was founded as an international organization to engage in intellectual and cultural activities. Affiliated with the Journalists and Writers Foundation (GYV), the Platform held a reception in Istanbul yesterday to mark the anniversary of its establishment. The program was conducted at the DAP’s office in Kuzguncuk, Üsküdar, with the attendance of various foreign consuls and diplomats in Turkey as well as with foreign and local guests. Speaking during the event, DAP Honorary President Professor Vladimir Sergeichuk, from Ukraine, indicated that the DAP was established 15 years ago to promote dialogue between people and foster peaceful coexistence in the region. “So far we have made great progress toward the fulfillment of these goals. The DAP basically aims to promote democracy, human rights and dialogue among countries,” he said.

Harun Tokak, the 2012-2014 Term President of the Dialogue Eurasia Platform, too, delivered a speech during the ceremony. He explained that the DAP had started 15 years ago with a handful of intellectuals in Istanbul, a city that bridges continents. “This benevolent movement is today 15 years old. For 15 years, it made a call for dialogue, going from one city to another and from one country to the other,” he said. Tokak asserted that the East has today emerged once again as a powerhouse. “China, Turkey, Russia, and India are booming. For this reason, any conflict among culture, religions and races should be avoided in this region. There are three forms of human relations: speaking, being indifferent and fighting. The DAP opted for speaking. Peace entails dialogue, i.e., listening to our addressees. Holding meetings and conferences in this region and with its publications and other activities, the DAP has developed a new language for consensus. The DAP brought together the intellectuals to create a fusion of horizons,” he added. Former Interior Minister Yaşar Yakış took floor in the program, touching on the fact that the DAP was the result of positive activities in Turkey and Eastern Europe. “In Eurasia, particular in former Soviet Union countries, we were given the strongest support from the members of this Platform. I hope that these activities are maintained as long as possible so that Turkey benefit from them,” he said.

Our desire is to bring peoples closer

GYV President Mustafa Yeşil, too, delivered a speech during the program. He indicated that there are good developments regarding peace and cooperation within the intellectual community and media sector. “In 15 years, the activities organized in Eurasia and in Turkey were very effective in bringing peoples closer. Our desire is to come up with new projects to accelerate the rapprochement among peoples,” he said. Nevzat Yalçıntaş, a former deputy of the Justice and Development Party (AKP), expressed his satisfaction with the activities of the DAP, adding that the Platform contributed significantly to the peace among countries. DAP Secretary-General Erkam Tufan Aytav, Cihan News Agency Editor-in-Chief Abdülhamit Bilici, Ahmet Turan Alkan, a columnist for the Zaman Newspaper, attended the program. The DAP is operating in Azerbaijan, Belarus, Estonia, Georgia, Kazakhstan, Kyrgyzstan, Moldova, the Russian Federation, Tajikistan, Turkey, Turkmenistan and Ukraine.

Opposition parties have repeatedly warned members of the ruling party allegedly involved in graft that they would be held accountable for their corruption. That is the reason why a number of leading members of the AK Party, including Erdoğan, are taking the local elections as a life or death issue for themselves