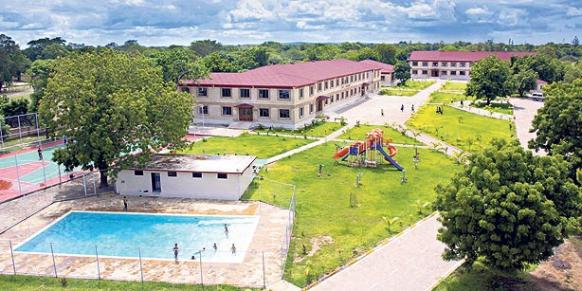 The inauguration of the complex, which covers an area of 6,600 square meters, was conducted by Belio Kipsang, undersecretary of the Kenyan Education Ministry. The ceremony was also attended by local officials and politicians. Speaking at the ceremony, Kimse Yok Mu Deputy President Ayşe Özkalay said that such facilities will help establish friendships between new generations of Turkish and Kenyan citizens in the future. For his part, the foundation’s Secretary-General Savaş Metin said they believe the facilities will contribute to a brighter future for the Kenyan people.

Kimse Yok Mu launched an aid campaign for countries severely affected by a drought in East Africa in 2012 and the organization has recently completed construction of four facilities in Somalia, Ethiopia, Uganda and Kenya.

A total of 650 students, from kindergarten to high school, will receive education at the complex in Malindi. The dormitory in the complex will provide accommodation to 120 students while the public kitchen will provide food for 500 people. There is also a fully-equipped sports hall, a swimming pool and a playground in the complex.

The construction of a hospital in the complex has also finished. The hospital’s inauguration will take place after it has been equipped with the necessary medical supplies.

The education complex will be run by Light Academy, which has carried out educational activities in Kenya since 1991.

Light Academy Schools General Manager Bilal Karaduman spoke at the inauguration about the importance of the education complex for the region and the country and offered his thanks to the volunteers of Kimse Yok Mu for sponsoring the project.

The schools will train 32 students in total in air-conditioning and Turkish language. Additionally, 50 new students including the ones at this school will be sent to Turkey for study. KYM’s official in Jerusalem, Harun Tokak, said “Every country has an orphan population but Palestinian has too many. We have to take care of these children. We’re here to embrace them and will hopefully achieve it.”