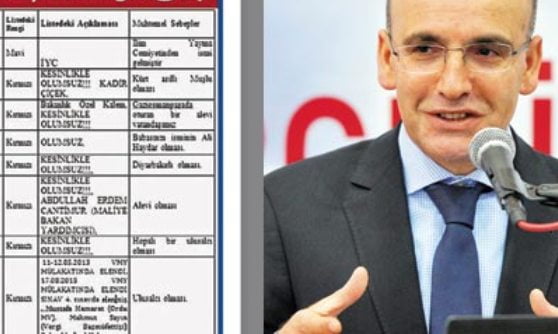 The candidate, who said he had failed all three oral exams in which he took part, said: “The grade by my name on the document, the references and all the information about my hometown completely match [my personal data]. I’m finished,” the candidate told Today’s Zaman.

Today’s Zaman contacted a candidate who, although he had achieved a good grade in the written exam, failed the later oral exams, allegedly because the candidate had been put on a “red list” by the ministry on the basis of his personal data.

The candidate did not want his name to be revealed, as he will sit two more oral exams to become a civil servant. “Am I not a citizen of this country?” the candidate, who sounded highly vexed, demanded to know.

Reports that appeared during the week in the Taraf daily demonstrated that the government has a recruitment policy based on “color lists” to avoid employing, in the public sector, people affiliated with certain groups, such as the Hizmet movement and the main opposition Republican People’s Party (CHP).

As well as sympathizers of the Hizmet movement, which is inspired by Turkish Islamic scholar Fethullah Gülen, and the CHP, Kurds, Alevis, as Alevism is considered an unorthodox Muslim sect by some, nationalists and those who took part in the Gezi Park demonstrations are also placed on the “red list” indicating that the candidate should not be employed, according to the daily.

There are also blue and green lists, according to Taraf, of approved candidates, with blue lists consisting of candidates closely affiliated with the ruling Justice and Development Party (AK Party) and those who were “brought up” by the National Youth Foundation (MGV), an Islamic charity organization that organized youth activities and provided academic scholarships to students but was closed in the aftermath of the Feb. 28, 1997 coup due to concerns of rising religious fundamentalism. Candidates who are members of the İlim Yayma Cemiyeti, a religious association that may have close ties to the ruling party, are also on the blue list.

Public sector employees are hired after a two-stage process. In the first stage, candidates sit the State Personnel Examination (KPSS) and those who pass are invited to attend an oral examination. According to the daily, those who are not considered appropriate, as determined by the color lists, are eliminated in the second stage.

“Although I answered correctly almost all the questions in all oral exams [I attended], those who cannot answer any questions correctly pass, [while I was eliminated],” the candidate said.

The candidate plans to sue the ministry over the issue but will wait to see how he fares in the remaining two oral exams. If the candidate is also eliminated in these two, the candidate will bring the issue to court.

Taraf reports indicated that candidates were categorized with notes such as “registered in Diyarbakır,” a mainly Kurdish province, or “father’s name is Ali Haydar,” apparently based on the assumption that the candidate is Alevi.