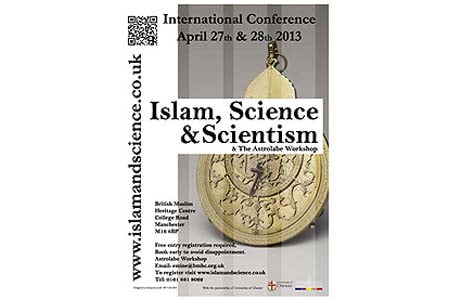 An international conference entitled “Islam, Science and Scientism” initiated by Prof. Salim Ayduz took place at British Muslim Heritage Center in Manchester, April 27-28. Participants from a large number of countries including the United States, England, Germany, the Netherlands, Turkey and Iraq, Saudi Arabia and Egypt attended the event. They gave speeches offering insights into whether or not Islam is at odds with science and scientism.

In his opening speech, American professor Robert Morrison discussed how science is influenced and reflected in tafsir (exegesis), with reference to the history of Islamic tafsir. He noted, in this regard, that Islamic civilization made a huge scientific progress particularly short after the advent of Islam which was reflected in tafsir starting from the early periods. In the last part of his speech in which he elaborated on the issue by presenting examples from the early and late period tafsir, he underscored that no one today does a close reading of the subject, as detailed as Fethullah Gulen and Said Nursi did. Morrison went on to say Said Nursi, in particular, is not getting the appreciation he deserves and that no other contemporary Islamic scholar is equally discussing science and scientism in detail. Noting that Said Nursi and Fethulah Gulen have introduced noteworthy interpretations with regard to Darwinism, Ayduz cited examples from 23rd Flash on nature, from Risale-i Nur collection. He concluded his presentation arguing that these two scholars’ views on the issue need proper analyses. The other speakers of the two-day conference as well presented analyses from multiple perspectives.

Another day-one speaker Dr. Hasan Horkuc started off his remarks from “Islam, Science and Scientism and Nursi” perspective. Affirming that Said Nursi is not fully appreciated even in today’s world, he thanked Prof. Morrison for putting emphasis on the issue. Next, he delivered a detailed presentation elaborating on Said Nursi’s struggle against various forms of science or scientism converted into a sort of religion or theology. He further said scientism in modern times is referred to as various names mainly such as positivism, Darwinism, materialism and naturalism. He stressed that Said Nursi is not at odds with psychics, chemistry, biology sciences-which are indeed manifestation of God’s various names, and that, unlike his contemporaries, he studied modern sciences and philosophy as a part of his education and asserted problems of Islam in our age cannot be addressed without contributions of modern sciences, philosophy and the science kalam (discipline of seeking theological knowledge through debate and argument, literally, meaning “word”)

Horkuc further detailed that Said Nursi is not against religion but forms of scientism that evolved into a religion or theology, by citing quotes from Said Nursi and examples from his books. Following his speech, Horkuc received notably positive feedbacks from the audience some of whom demanded the record of his speech. They commented that Said Nursi’s approach is comprehensive and definitely a project. Some, on the other hand, unfortunately-as Horkuc puts it-said they are not familiar with Said Nursi and inquired how and where they can obtain the pieces by this Islamic scholar with such thought-provoking interpretations. Horkuc said a Risale-i Nur Studies program has been available at Durham University for years and added, “The truth is that even the Muslims in England are not truly familiar with Nursi.” Presentations were scheduled to continue on day-two.

Source: [in Turkish] ZamanGermany, 15 May 2013. English translation is retrieved from HizmetMovement.Com