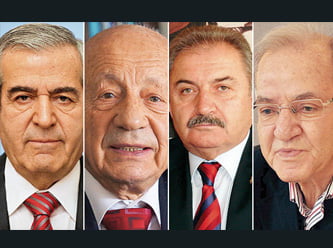 ANKARA
One hundred politicians who previously served in Parliament, including former ministers, issued a declaration on Saturday calling on the candidates in the upcoming local elections to declare their personal assets to the public to prevent allegations of bribery and corruption.

“Education, prevention and investigation processes [in the fight against bribery and corruption] are important. We perceive the declaration of personal assets by mayoral candidates, candidates for provincial and municipal councils on the eve of local elections and in the proceeding election calendar as a measure against bribery and corruption. We do not have the right to lose hope. We hope for democracy and good governance. Elections are an opportunity, a chance [to this end],” read the declaration. The local elections are planned to be held in March 2014.

The Cabinet was shaken by the resignations of three ministers on Wednesday over a sweeping corruption and bribery investigation, with one of the ministers calling on Prime Minister Recep Tayyip Erdoğan to step down as well.

However, Environment and Urban Planning Minister Erdoğan Bayraktar, in a harsh statement, claimed that he had been pressured to submit his own resignation to save the prestige of the government, adding that the prime minister should also quit as most of the amendments on construction plans mentioned in the corruption investigation were made on Erdoğan’s orders.

“We are going through a process in which bribery and corruption allegations have become prevalent and even institutionalized,” the declaration read. “Everyone has rights, duties and responsibilities to have better communication, participation, rule of law, openness, transparency, accountability, auditing, equality, activity and strategic vision,” it added.

The resignations came eight days after the launch of the investigation which resulted in the arrests of the sons of Çağlayan and Güler as well as over 20 other suspects, including Halkbank General Manager Süleyman Aslan and Iranian-Azerbaijani businessman Reza Zarrab.

In response, Prime Minister Erdoğan spoke at the AK Party’s expanded provincial chairmen meeting and called the corruption operation an “international plot” supported by some collaborators within the country who aim to sow discord in Turkey. In several explicit references to the Hizmet movement, inspired by Turkish Islamic scholar Fethullah Gülen, the prime minister claimed that the operation was orchestrated by “gangs” and a “parallel state.” He also said the operation has cost Turkey some $20 billion.

In addition, Erdoğan criticized the definition of the operation as a corruption and bribery operation, which he said is aimed at discrediting some “people already proven to be clean.” “If there is a flaw in the legal system, we will fight against it within the area of our authority. We are a political party that acts with principles,” he said, adding, “We will get rid of the rotten ones,” in a veiled reference to AK Party members who are involved in corruption and bribery.

The declaration states that in the fight against bribery and corruption all powers — the legislative, the executive and the judiciary– as well as all state agencies and institutions, the private sector, nongovernmental organizations and the public need to cooperate and to have an action plan.