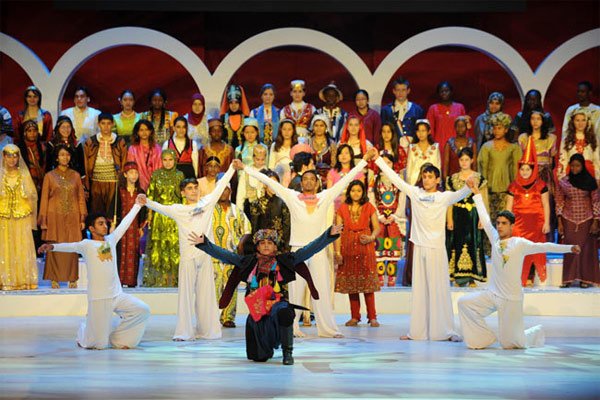 While traveling from downtown Ankara to the tourist district of Kızılcahamam in springtime, one definitely notices how fabulous the poppies are that cover the hillsides. It would be difficult for many travelers to imagine a better view.

However, for about a week this conclusion is certainly untrue for anyone whose destination is the Asya Thermal Resort in Kızılcahamam where 700 contestants from 115 countries will compete in the 2009 International Turkish Olympiads.

Marking the seventh year of this event, the International Turkish Olympiads is just one of the fruits of the tireless work of self-sacrificing teachers who have moved to different parts of the world, being inspired by the well-known Turkish Islamic scholar Fethullah Gülen, widely considered to be one of the most influential thinkers alive today.

Having witnessed the harmony between the students of those 115 participating countries, despite the fact that they are competing against each other for first place in one of the 14 different categories all requiring mastery in Turkish, one cannot but agree that if global peace is going to be a reality one day, its existence will owe a great deal to those who incessantly communicate their transcendent love, which does not recognize borders or discriminate against anyone.

Walking among those students without even uttering a word, it is impossible not to see the beauty they form together. Students coming from Nigeria, the UK, Yemen, the US, Mexico, Tajikistan, Australia and 108 other countries around the world, hand-in-hand, are the perfect assurance for a better tomorrow. Nothing could be easier to accept after having seen Gulvardi, a Georgian girl, reciting a poem on the podium and being applauded most by a Russian boy, Alexis, while he was also trying to hold his country’s flag under his arm. However, it has only been less than 10 months since the Russian Federation launched an offensive on Georgia, alarming the world to a possible wider-scale clash. Who would now bet even a single penny that Alexis, giving Gulvardi a standing ovation, would ever agree to a similar offensive on her country if he has any say in his country’s future? What about the friendship between Iraqi Sazgar Darabek from Sulaimaniya Girls College and American Denise Stacy Uraias from Texas Science Academy? They were sitting next to each other just a few rows behind Alexis, waving to Gulvardi, whom they met two days ago.

A Turkish proverb says no pleasant outcome comes without fatigue. Who bore all the pain and ultimately helped turn what is at hand today — something that was only a dream not so long ago — into a reality? The answers are among the students at Kızılcahamam: their teachers. One of them, Behçet Polat, married with two sons and who is presently teaching at Şule College in Australia, was giving last-minute tips to his five students, Mualla, Cemile, Javeria, Jayden and Afrida, who surrounded him with their eyes wide open. Polat first started working in the Siberian steppes in the freezing cold and then moved to Australia after eight years, a climate change from an average annual temperature of -20 Celsius to 20 degrees. Mualla and Cemile are the daughters of his equally devoted colleagues working in the same country. Mualla, who is competing in the short essay category, was born in Russia and then moved to Thailand and Ghana and then returned to Russia along with her parents when she was nine years old. After having spent another year in Moscow, her father started working in Australia five years ago, where she met Cemile, who had come to the country only 30 days after she was born in Turkey’s southeastern province of Kahramanmaraş.

In order not to miss the significance of their stories, it should be kept in mind that these men are not diplomats who work in various countries during their careers because of the nature of their professions or sailors voyaging around the world. They simply chose to live like this to bring the message of love to whichever Turkish schools they go to work in. Adem Aldemir is another of those heroes. Having grown up in Burdur, a small province with a population of less than 250,000 in southwest Turkey, he first moved to Benin and then to Burkina Faso and on to Togo, where he presently teaches at the International Zodiac College. Interestingly enough, there isn’t even any Turkish diplomatic representation in any of those three neighboring countries on the African continent.

The fatigue and pain that needed to be contended with in order for these teachers to deliver a fruitful outcome cannot be underestimated. They made the sacrifice of moving to countries far from Turkey that most of their fellow countrymen have never even heard of and where the climates are not so pleasant. There are examples of those devoted men and women who traveled to some zones of conflict such as Iraq, Afghanistan, Bosnia, Kosovo and many others to reach the children of these countries, too. Parviz Hoşimov, Ramazan Safarov, Behruz Cumayev and Rüstam Pirakov, members of this year’s Tajik team, have told the story of the first Turkish teachers coming to their country. Mentioning that there are six Turkish schools operating in Tajikistan today, they said it was during the civil war between 1992 and 1997 when the first one was opened by a handful of men determined to develop an “island of peace” in Tursunzade, located 60 kilometers west of Dushanbe. “The entire country was crumbling with the impact of the war back then. People were afraid to go out to even buy bread and milk from a grocery store.” They remember with grief the atrocities perpetrated in those days. The children of the once war-ridden country, where brothers pointed guns at each other, are now making Albanian, Argentinean and Sudanese friends while communicating in Turkish with them.

Looking at the pictures he had taken with a Serbian contestant in the waiting hall on his laptop was Chyngyz Shukurov, 19, from Kyrgyzstan. He managed to participate in the International Turkish Olympiads in his fourth attempt because he said: “The competition was too tough back at home; it was like everybody was willing to come here. I was unfortunately not successful enough in the first three.” Each year, contestants are selected from every country where there is at least one Turkish school by a jury of teachers working at that particular institution. Asked if he knew anything at all about Serbia before coming to Ankara, Shukurov replied: “Yes, but only a couple of players on their national soccer team. Now I can talk about the country for hours.” Brenda, 15, and Viridiana, 14, from Mexico came up with an answer recalling something else. “In our country, many people do not even know that the very host of this spectacular organization, Turkey, exists.” Raindrop High School in Mexico, however, is a reality now, remedying the lack of information in two ways; about Turkey in Mexico and vice versa, and even beyond.

For someone speaking a language that is much more accepted worldwide than Turkish, learning that particular language can be considered much more difficult, but Ocean Carli, 11, from the UK is a solid counter-example. Son of a sailor, hence the name, Ocean can hardly be distinguished from his Turkish friends while playing in the courtyard of the premises. Holding tight to the English flag with a St. George’s cross on it, he was supporting an Azeri girl reciting a poem “I fell in love before I even met you.”

Having been fascinated with what was seen in Kızılcahamam, one definitely misses the poppies on the way back to Ankara.