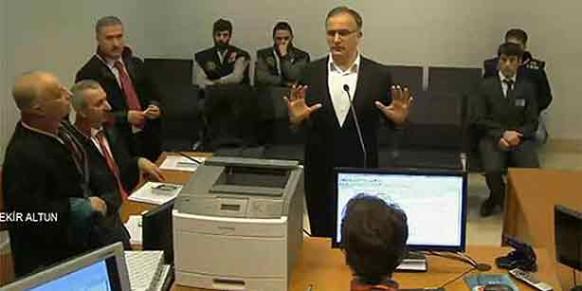 A still image from footage that shows Dumanlı is being interrogated before a prosecutor on Dec. 17. (Photo: Today's Zaman)

The observers emphasized that the fact that Dumanlı’s detention is based solely on his journalistic activities deepens their concerns for the freedoms of press and expression in Turkey.

Dumanlı was detained on Dec. 14 along with Samanyolu Broadcasting Group General Manager Hidayet Karaca as part of a government-backed police operation against police officers, high-level media members, and directors and producers of a popular television serial. He was released by the court last Friday.

Video footage that was recently leaked to popular video-sharing website YouTube showed a part of Dumanlı’s defense to a court on Thursday. In a two-minute video from his court hearing at the 1st İstanbul Penal Court of Peace on Dec. 18, Dumanlı can be seen with three of his lawyers standing before Judge Bekir Altun.

“Am I being [prosecuted] for only two columns, written by Hüseyin Gülerce and Ahmet Şahin, and a news report?” Dumanlı asks. Judge Altun responds by saying, “Yes, this is why you stand accused.”

Dumanlı is accused of being part of a gang that conspired against an al-Qaeda-linked group called Tahşiyeciler by “ordering” two columnists to write about the group and by also publishing a news report of a speech made by Turkish-Islamic scholar Fethullah Gülen.

Speaking about the video, Veteran Turkish journalist Nazlı Ilıcak said that it clearly shows Dumanlı was detained for his journalistic activities, adding: “Those who wrote these columns are free, as it should be. Furthermore, these writers say that they did not write the columns on an order from anybody. Even so, an editor-in-chief can inspire his writers. However, they say such a thing did not happen. All in all, the speech of Gülen became the subject of many reports in various newspapers. This can be done; there is no crime.”

A Turkish government whistleblower writing under the pseudonym of Fuat Avni, who correctly predicted that a police raid would take place on the Zaman daily, wrote on Wednesday night that Dumanlı will be detained again based on “fabricated evidence.”

Commenting on Avni’s recent tweets, Ilıcak said that the possible re-detention of Dumanlı will thoroughly display the illegalities and unlawful deeds in Turkey. “I would say I do not regard it as possible. However, anyything is possible in a country like Turkey.”

Taraf columnist Hayko Bağdat is another journalist criticizing the reasons for Dumanlı’s detention. Speaking with Today’s Zaman, Bağdat said that the operation is not judicial, but politically motivated. Saying that the institutions that should be impartial in Turkey are under occupation by politicians, Bağdat said that people don’t trust the police officers who detain journalists, the prosecutor who investigates them or the judges who decide on the cases.

“So, I am strictly against the detention or interrogation of the columnists who wrote the columns and the reporters who made the report, let alone the newspaper’s editor-in-chief,” Bağdat said, defining the accusations directed at Dumanlı as “nonsense.”

Derya Sazak, editor-in-chief of the Yurt daily, said that it has been revealed that the accusations against Dumanlı are not about any “gang,” but about his stance as a journalist, adding: “If democracy is still valid in Turkey, this act goes against the claim that it still survives in the country. Such things can [only] happen in repressive and authoritarian regimes.”

President of the Press Council Pınar Türenç has also commented on the accusations against Dumanlı, saying that it is impossible for them to accept both the detention of a journalist and the accusations that one is a member of a terrorist group based on two columns and a news report. Türenç said such things do not comply with the standards of democracy.

Activist Ömer Faruk Gergerlioğlu said that linking a person with an armed criminal organization just based on columns cannot be accepted. He defined the recent media operation as a “show” without any concrete evidence directed at the detained suspects.

Speaking with Today’s Zaman, main opposition Republican People’s Party (CHP) parliamentary group deputy chairman Engin Altay said that he does not find the re-detention of Dumanlı as possible, adding that such a thing will trouble the public conscience.

Commenting on the video that was leaked to the media, Altay said: “This means Dumanlı was not detained on accusations of terrorism or being member of an armed group [as it was asserted], but he is being accused [of a crime] for his journalistic acts. Such proceedings are attacks on journalism and the freedom of expression. This means that all the journalists writing against the AKP [Justice and Development Party] are under threat. The Dec. 14 operation is a clear coup conducted against people’s right to information and the freedom of press in Turkey.”

Nationalist Movement Party (MHP) parliamentary group deputy chairman Oktay Vural, speaking during a parliamentary press meeting on Thursday, pointed to the leaked video and said that the accusations against Dumanlı based on the columns and report are a “disgrace.” Vural also sarcastically warned journalists covering his press meeting to be cautious, as the things they write might be seen as evidence of a crime by the government in the future.

MHP Kütahya deputy Alim Işık said, “Arriving at the [idea] that a terrorist group exists based on two columns and one report is just nonsense.”

Also speaking with Today’s Zaman, Selami Ekici — a lawyer representing the family of Muhsin Yazıcıoğlu, the leader of the Grand Unity Party (BBP) who was killed in a chopper crash in 2009 — said, “The universal values and the law are being violated for revenge.”