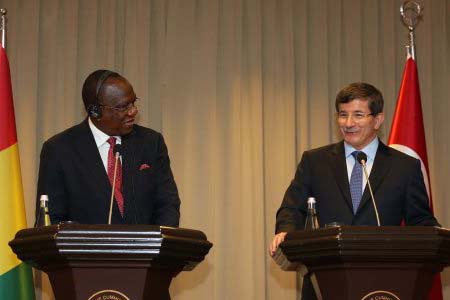 The Guinean Minister of Foreign Affairs Lounceny Fall met with his Turkish counterpart Ahmet Davutoglu in Istanbul on April 5, as a part of his official visits in Turkey. Following the bilateral meeting, the two ministers held a joint press conference.

In his remarks at the conference, the Guinean minister stressed the significance the bilateral relations and further said the relations have been steadily improving over time on economic and political levels. Underlining his high regard for Turkey’s role in international arena, he stated that his country admired the role Turkey adopted for stability in Somalia. “Turkey currently has diplomatic missions across the entire continent while it used to have barely 3-5 of them back in 2002. We intend to develop our relations in every field. This year, we will also go into critical partnerships under Organization of Islamic Cooperation” said the minister. Touching upon the conflicts in Mali, as well, “Mali needs help from each and every country. It is of great importance that we help this country” he said and revealed that they are considering joint projects with Turkey. Highlighting the mission that the Turkish schools assumed in promoting relations between Guinea and Turkey Fall said “The Guinean people are fond of the Turkish schools in our country.”

The Turkish Minister of Foreign Affairs Ahmet Davutoglu recalled that the trade volume between Turkey and Guinea was 7 million dollar in 2004. He noted that it climbed to 60 million dollar as of this year and that they target 100 million next. He additionally revealed that Turkish Airlines is to launch flights to Guinea. Davutoglu noted that they agreed on training for Guinean diplomats by the Turkish ministry. Giving an account of Turkey’s recent expansion in Africa, he went on to say they have been actively carrying out projects to expand into new regions. “We have launched 22 new embassies in the last 3 years. West Africa is a region that we historically have strong ties with and that offers wide range of opportunities. Guinea is indeed an agricultural country with vast irrigation fields. And we seek to share our acceleration achieved in agriculture. Hardly a week goes by without an African friend visiting us today. Turkey used to host only one minister of foreign affairs every few years. Now we host at least 3-4 of them a week which is an indicator of the progress we have achieved in Africa” Davutoglu said.

Source: [in Turkish] on Cihan, April 8, 2013. English translation is retrieved from HizmetMovement.Com