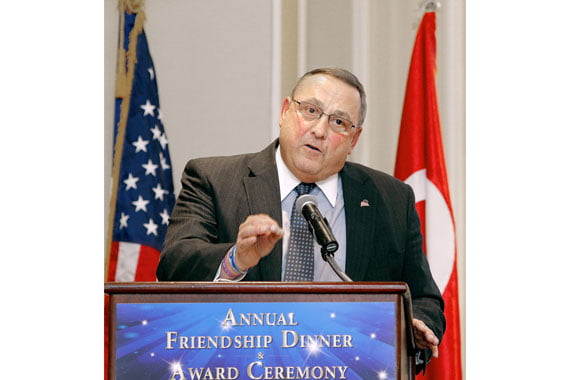 SOUTH PORTLAND — To expand its economy, Maine must welcome more immigrants, Gov. Paul LePage said Tuesday, praising a new Turkish cultural organization for its work in the state. Speakers point to business and education ties and potential [between Turkey and State of Maine] as the governor and two others receive awards.

“It’s time that we here in Maine appreciate and work with other countries to improve our economy,” LePage said as he accepted a leadership award from the Turkish Cultural Center Maine at its first Friendship Dinner, at the Portland Marriott at Sable Oaks. 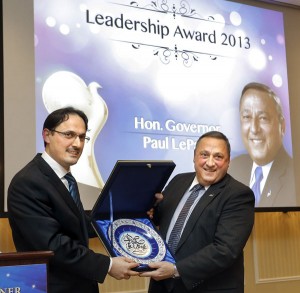 “It’s important for Maine to grow,” the governor said. “We need to invite (immigrants) to come and live among us.”

“We strongly believe that the friendship and alliance between the United States and Turkey will significantly contribute to the global peace,” said Eyup Sener, president of the Turkish Cultural Center Maine and the New England director of the Council of Turkic American Associations.

The Turkish Cultural Center has existed for only about two years, he said. About 300 people from Turkey are living in Maine, although if Turkic people from many countries in southeastern Europe are counted, that number climbs to about 2,500, Sener said.

Turkey is Maine’s 11th-largest international export destination. According to a U.S. Census report, $11 million worth of goods, ranging from dairy cattle to wood products, were shipped from Maine to Turkey in 2010 to 2011.

Several speakers at Tuesday’s event emphasized the potential for business and educational ties, while spreading a message of peace. Stokes said Augusta is in the final stages of establishing a sister-city relationship with Uskudar, a section or borough of Istanbul.

Several state legislators who attended the dinner have gone on one of the three trips the Turkish Cultural Center has organized for lawmakers to visit Turkey. There also are educational ties between Maine and Turkey.

At the K-12 level, a Turkish group is trying to open a charter school in Maine. It would be part of a network of 800 schools operated internationally by followers of a Turkish imam, Fethullah Gulen. The group’s application for a charter school in Bangor was denied in early 2013, and the group has applied again this fall, for a school in the Lewiston area.

Followers of Gulen, who lives in self-imposed exile in Pennsylvania, have been involved in starting at least 120 charter schools in 26 states, according to investigations by The New York Times, “60 Minutes,” USA Today and other news organizations. The schools are often top performers and have an entirely secular curriculum, but they have drawn criticism for their lack of transparency, their hiring and financial practices and concerns about their motivation, which experts say has as much to do with shaping the evolution of Turkey as it does with educating young Americans.

A short film on Gulen and his mission was shown at Tuesday’s dinner.

Katz said Tuesday that he hopes Maine can attract Turkish students to the state university system. He noted that Maine has an aging population that is not very diverse.

“The only way to change that is to become a place that welcomes everyone,” he said.

“Maine must be more welcoming,” he said. “There’s no doubt that Maine’s future rests on in-migration.”

Keschl also went on a trip in 2012, along with Sen. Joseph Brannigan, D-Portland; Rep. Jane Knapp, R-Gorham; and Rachel Talbot Ross, president of the NAACP’s Portland branch. Keschl has said that officials from the Council of Turkic American Associations were up front about their ties to Gulen when he questioned them directly.

The council is the regional affiliate of the Washington, D.C.-based Turkic American Alliance, the umbrella organization for the Gulen movement in the United States.

Why was the White House even talking about Gulen, who has been living peacefully, and legally, in Pennsylvania?