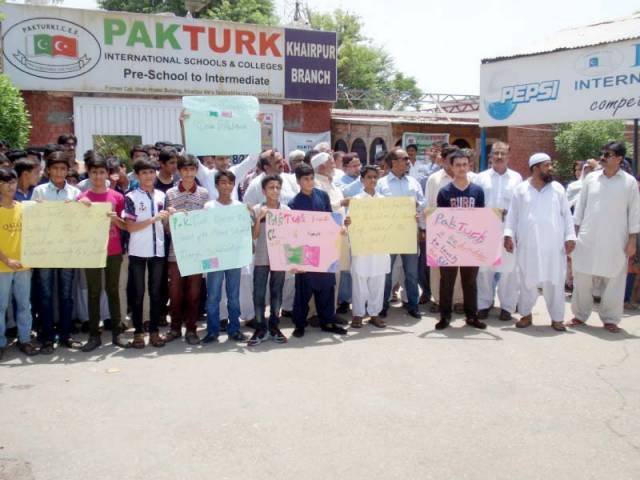 The students and their parents carried placards with slogans in favour of Pak-Turk School and expressed solidarity with the school management. PHOTO: EXPRESS

SUKKUR: A large number of students and their parents protested the closure of Pak-Turk School in Khairpur outside the school’s building on Saturday.

The students were carrying placards inscribed with slogans in favour of Pak-Turk School. The protesters expressed their solidarity with the school’s management and vowed to put up resistance against the closure of the school.

Praising the school’s faculty, an alumnus Amanullah said, “Besides providing quality education, the teachers focused on capacity-building and character-building of the students.” The school also provides counselling services without any extra cost, he added.

Amanullah, who is now studying in University of Management Technology (UMT), Lahore, also remarked that his teachers at the Pak-Turk School not only helped him getting into UMT but also stay in touch with him.

Many students of Pak-Turk School Khairpur have gone to USA, UK and other countries to pursue their higher education, informed Amanullah. It is the duty of the government to provide better education facilities. Unfortunately, most of the schools in rural Sindh are serving as drawing rooms and warehouses instead of imparting education, he added.

One of the school’s class 10 students, Arsalan Ali said the Pak-Turk School management and faculty focus more on producing thoroughly educated and good human beings. “We proudly represent Khairpur in the olympiad held every year.”

The performance of the faculty and students could be gauged through recently announced results of secondary school certificate part II by the Board of Intermediate and Secondary Education, Sukkur, in which 40% students of the school received A1 grade, said school’s teacher Khalid Suhag while speaking to The Express Tribune.

Speaking about the fees of the school, Ali remarked people pay millions of rupees to secure the future of their children then why is impossible for them to Rs5,500 per month? “Pak-Turk School is our future and we will not allow anybody to put our future at risk,” he added.

In the school, there is no discrimination on the basis of religion or ethnicity in our school, rather meritocracy is encouraged, said another student Rizwan Sial. “This school has been producing highly educated students every year and I term it as the pride of Khairpur.”

Referring to the foiled military coup in Turkey, he said such incidents occur every now and then but it doesn’t mean we sacrifice effective institution in the name of politics. Giving example of the tragic incident of Army Public School in Peshawar, he said, it was the biggest act of terrorism in an educational institution but nobody thought of shutting it down. Then, why is the government putting at risk the future of 10,000 students studying in Pak-Turk Schools across the country?

We had to make many sacrifices to leave our country and come to Pakistan for this noble cause. Neither politics nor religion is our agenda. We aim to impart quality education to the people, said a Turkish employee of the school, requesting anonymity.

Replying to a question regarding the influence of Fatehullah Gulen in Pak-Turk Schools, he said, it is wrong to link an educational institution with any political or religious movement.

As far as fee structure of the school is concerned, he said, many private schools are charging much higher fee than Pak-Turk schools. He was hopeful that the Pak-Turk schools will keep running to provide better future to the young people in the country.

I was shocked and deeply saddened by the devastating news of explosions in Sri Lanka. I firmly condemn this horrific attack, which turned a day meant for the celebration of Easter by Christians around the world into bloodshed.