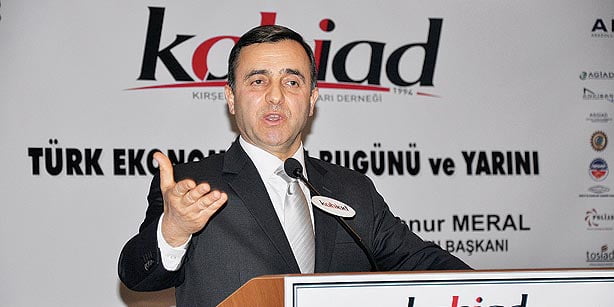 Speaking during a meeting organized by the Federation of Anatolian Businessmen (ANFED) in Ankara, Meral said: “We are in an era of information technology. Those who own and share information have an advantage. Freedom of expression is also a precondition for countries for getting ahead. The ban on Twitter prevents developments to this end.”

Stressing that with the recent decision of the government Turkey has moved further toward becoming an authoritarian regime, Meral said that as businesspeople, TUSKON condemns the Twitter ban and urges that it should be removed as soon as possible. “It is impossible for Turkey to reach its economic targets by behaving in this manner,” Meral added.

All those attempting to access Twitter in Turkey have instead been redirected to an Internet page detailing a court ruling that a “protection measure” has been taken, blocking the site. However, many have been able to get around the ban, either by using virtual private network (VPN) software or changing their domain name system (DNS) setting, effectively disguising their computers’ geographical whereabouts.

Speaking about Erdoğan’s remarks about the International Turkish Language Olympiad, when he said that the government will not provide venues for the Olympiad which is held in Turkey, Meral said: “On the one hand we have Fethullah Gülen saying that everybody has the right to speak and be educated in his or her mother tongue, while on the other hand there is opposition to the Turkish Olympiads which contribute to the status of Turkish as a world language and are held without receiving a penny from the state. I will leave it to people to judge for themselves the difference between these two perspectives.”

Gülen, an Islamic scholar who is the inspiration behind the Hizmet movement — a worldwide network of activists in education, charity and social outreach, has described the large-scale slander, pressure and oppression the movement faces as worse than anything seen during military coup periods in Turkey.

Meral also pointed to rising tensions in Turkish politics and stressed that a tense political atmosphere frustrates foreign investors. “Laws have been changed overnight in Turkey. We have changed from a respectable country to one where laws are changed day by day. This makes investors pause for thought,” Meral said.

Discussing the corruption and bribery scandal, Meral said that no leader or political party can survive under such a heavy burden of corruption allegations. “Whatever you do, even if you ban Twitter, people will simply resort to ‘Nexter.’ One cannot cover this [corruption scandal] when communication systems are so developed. It [the Twitter ban] is simply delaying a foregone conclusion.”

On Dec. 17 of last year, İstanbul and Ankara police staged dawn raids and detained over 50 people as part of a far-reaching investigation into claims of corruption and bribery. Among the detainees were bureaucrats, well-known businesspeople and the sons of three ministers.

Stressing that according to one ranking of countries by economic freedom, Turkey is ranked 73rd, the TUSKON chairman strongly criticized the recently passed bill which shuts down prep schools (dershanes) — many of which are run by the Hizmet movement — on the grounds that the decision deals a blow to the right to free enterprise in Turkey.

The AK Party government’s bill banning the privately owned prep schools was put to a vote and passed by Parliament — in a session that 90 deputies from the ruling party did not attend — and signed into law by President Abdullah Gül in mid-March. The move highlights Gül’s solidarity with Erdoğan as the prime minister battles a corruption scandal he says has been orchestrated by Gülen, who is based in the US, and the Hizmet movement.