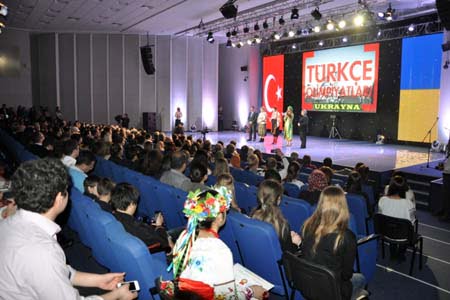 On March 30, a feast of Turkish language was enjoyed in Kiev, at Ukraine finals of Turkish Language Olympiads to mark its 11th year. The award ceremony of the finals, for which 204 finalist students out of approximately 2,500 qualified, took place at the centrally located Ukraine House in Kiev.

In attendance of the final event were the Ambassador of Turkey to Kiev Mehmet Samsar, consultant to Ukrainian PM Anatoli Tolstuhov, deputy-governor of Istanbul Harun Kaya, provincial directors of education of Kiev and Istanbul Oksana Dobrovolska and Muammer Yildiz respectively, and various education departments officials, a delegation of businessmen from Ankara, university rectors, academics in addition to numerous Turkish and Ukrainian guests.

Meridian International Schools Board President Hasan Huseyin Kes delivered the opening speech of the event that kicked off with a son et lumiere and announcements with Turkish drums as well. In his speech, Kes summed up the background story of the Turkish Olympiads in Ukraine. He said, “The Olympiads were initially participated by 20 students from four institutions and now it has reached to 204 from 30 institutions. I would like to thank everyone involved to make this happen. It was a humble start with the language of love, Turkish. Where was it headed? Towards universal peace.”

The provincial director of education Oksana Dobrovolska said, in her emotional speech, “Dear esteemed guests, I have brought you the regards from Kiev Mayor Aleksandr Popov. We have gathered here today and are talking about love and peace. We have to instill these values in our children and next generations as two neighbor countries. Wish us many Olympiads together! She concluded her speech with tears in her eyes. Dobrovolska was followed by her counterpart Muammer Yildiz who pointed at her and said, “You will probably understand what I mean if you can see how the language of love has turned into tears and love in her heart.” He further said, “We watched such a spectacular show. Our children performed in Turkish exceptionally in various categories. We have witnessed the same for years together. It is mean a lot to us to have our language- the language of love indeed- spoken and performed in around the world as it indicates the growth and recognition of our country. We would like to thank those friends who organize this event. Such a heroism and efforts lie behind all these.”

Afterwards, deputy-governor of Istanbul Harun Kaya gave his remarks. “Children are speaking our language all around the world. They communicate in Turkish. To understand is the key for people of the same community and peace to coexist and to share happiness. The key to peace is people understanding and interacting with each other. I would like to congratulate the anonymous heroes involved in this cause and thank all the administration and teachers” said Kaya.

At the end of the event, the high-profile guests were called up on the stage and sang along “A new world” with the finalists.

Source: [in Turkish] on Cihan, March 31, 2013. English translation is retrieved from HizmetMovement.Com