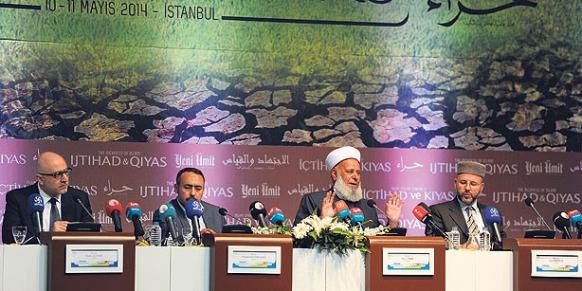 The symposium, titled “Ijtihad and Qiyas: The Richness of Islam,” took place at the İstanbul Congress Center and was jointly organized by the Yeni Ümit and Hira magazines.

The participants of the symposium agreed that ijtihad reveals the universality of Islam and gives Muslims a chance to find solutions to their problems everywhere and under any circumstances. They said ijtihad needs to be kept alive so that the Islamic ummah (nation) can remain standing.

Professor Suat Yıldırım spoke on the first day of the symposium and said the concept of ijtihad shows how Islam is sufficient in addressing the needs of humanity and responds to the changing conditions of the times.

“We can proudly say that wherever Muslims have lived over the last 14 centuries they have seen that principles of Islam are sufficient for them for problem solving. This has been possible thanks to ijtihad,” Yıldırım said.

Professor Beşir Gözübenli explained that ijtihad is an effort to reveal the message of God. He mentioned the last sermon of Prophet Muhammad, in which he said he has left the Quran and sunnah [his way of life] as a legacy to Muslims. Gözübenli said that thanks to ijtihad, the correct understanding of the Quran and sunnah, their practice and their transfer to future generations are assured.

Professor Abdunnasir Abul Basal from Jordan talked about the importance of ijtihad in ensuring the Islamic ummah is made up of upstanding citizens. He said Prophet Muhammad taught ijtihad to the sahaba (his companions) so that they could find solutions to new problems.

“Ijtihad is one of the signs of a healthy Muslim life and mind. Ijtihad is an obligation for Islam to exist in reality. If there is a problem, there is a need for ijtihad to find a solution,” he said.

The editor-in-chief of Hira magazine, which is published in Arabic and has an audience of over 40,000, said the editorial board of the magazine decided to discuss ijtihad and qiyas in their latest edition.

Speaking on Sunday, the second day of the symposium, Jordanian Professor Ali al-Faqir, said as long as Muslims fulfill the requirements of ijtihad, the doors of reasoning will always be open for them. Al-Faqir warned that if qiyas is used by incompetent people, this could lead to disastrous results for the Islamic ummah.

“We need to make use of ijtihad and qiyas. We are the members of a religion of tolerance. The future of our ummah is very bright,” he said.

Professor Muhammad Babaammi said in his speech that ijtihad, freedom and submission to God are three inseparable concepts. Jordanian scholar Marwan al-Fuari echoed these sentiments and offered his thanks to the organizers of the symposium.

He also praised the Hizmet movement, inspired by Islamic scholar Fethullah Gülen, and said such a movement cannot be accused of being Hashashins — a medieval group that carried out political assassinations. Turkish Prime Minister Recep Tayyip Erdoğan, who has adopted a hostile attitude toward the movement, accused it of establishing a state within the state and of being behind a graft probe in which several government members were implicated. He likened Hizmet to the Hashashin.

“Dear friends of such a holy movement. Don’t be saddened by the problems you face. You are strategic architects. You are not Hashashin,” he said. He added that the Hizmet movement is not involved in any work against the interests of Turkey.

Gülen sent a message to the participants of the symposium, saying: “Ijtihad and qiyas present a significant field of expansion … that transcends time and space, as it is found in the Quran and the sunnah. We will never run out of solutions and answers as long as these rich sources are available, with their doors wide open for those who are able to benefit from them.”

“Your gathering today is an example of revisiting the essential sources of our cultural heritage with untarnished feelings … and it is my sincere hope that it will contribute extensively to our academia and culture. With these feelings, I present my greetings, love and respect to all participants, and ask them to include me in their prayers,” Gülen said.

AYTEN ÇİFTÇİ İSTANBUL – Oct.9, 2011 John L. Esposito, an American Professor of Islam, praised the Gulen Movement and the Turkish Schools operating around the world. He said: “ They have one goal. That is to enlighten the world with education. This is why we need the Gülen Movement in this age.” Dr. John L. […]