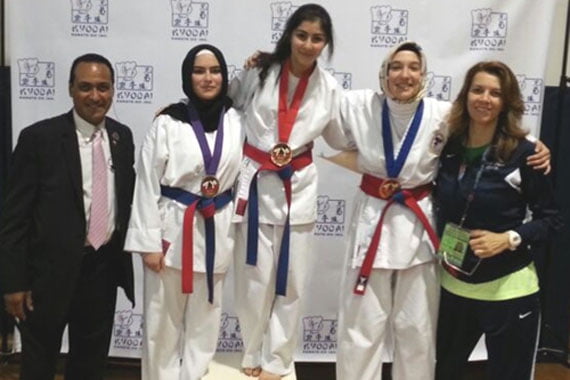 The team’s sensei and a former two-time world karate champion, Meral Sonmez, who is the school’s vice-principal at the same time, noted that the students have been displaying a growingly high performance, albeit their five-year-old karate clubs. “We’ve been teaching them how to be a good person for society as well. We would like them to be well-rounded individuals. We’ll keep participating future tournaments and try our best. I congratulate my students on their achievements so far,” Sonmez said. She further thanked the school’s principal Varol Gurler and general-manager Tufan Aydin for their support.

The General-Manager Aydin expressed his pleasure with the students’ whole team championship. Noting that as Amity School they cherish students’ social and mental developments too alongside academic achievements, “Our karate team has accomplished great achievements so far under the leadership of sensei Sonmez. I wish them continued success,” Aydin remarked. The Amity team had earlier got a total of 34 medals in two US karate championships.

A business delegation of Houston-based companies is currently visiting İstanbul in a program organized by the Turkish Confederation of Businessmen and Industrialists (TUSKON) to discuss expanding trade ties and business opportunities with their Turkish counterparts. The visit comes on the heels of the recently launched direct flights between Houston and İstanbul by Turkey’s national flag […]