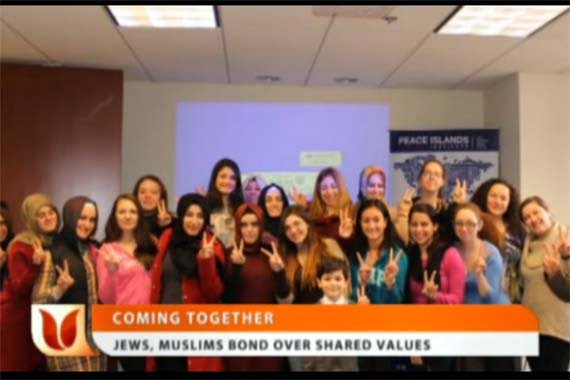 Jews and Muslims have a long history together. Despite various conflicts around the world, those who believe in dialogue...

Rabbi Rachel Kahn-Troster, Rabbis for Human Rights: “We have to understand that we have common issues in our communities that we can work together to improve our schools, we can work together for immigration reform and that these are issues of shared concern that are things we feel passionately about.”

Rabbi Rachel Kahn-Troster believes that Jews and Muslims should respect one another, and need to co-operate, for the sake of peace.

Imam Abdullah T. Antepli, Chaplain, Duke University, NC: “It was the Jewish community on campus who helped us build a halal kitchen because they already established a kosher kitchen. When we were negotiating our dietary restrictions, our prayer regulations, looking for a space for Muslim community to congregate, only the Jewish community understood us because the religious, cultural, spiritual needs are very very similar.”

Hayrunnisa Kalac, Young Peace Builders Club, Brooklyn Amity School: “We are a group of Turkish Muslims from the Amity School and Jewish Americans from the Kings Bay Y Cultural Center and we get together like every two weeks or so to explore our commonalities and differences and to get to know each other.”

Hayrunnisa Kalac is a student at Brooklyn Amity School and a member of the Young Peace Builders club.

Their efforts were highlighted in local newspapers.

Hayrunnisa Kalac, Young Peace Builders Club, Brooklyn Amity School: “So we come together to talk about our commonalities, to get to know each other and not hate each other, to love each other because that’s our main value I believe.”

Imam Abdullah T. Antepli, Chaplain, Duke University, NC: “Only in those kind of meaningful friendships that the beautiful, ethical, moral messages of these both Abrahamic traditions, the message of peace, the message of living together, the culture of coexistence comes together.”