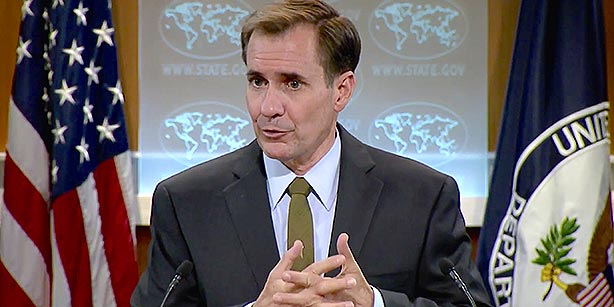 US State Department spokesperson John Kirby commented on Thursday during a daily press briefing on a German magazine’s claim that the National Security Agency (NSA) had spied on Hakan Fidan, the chief of the Turkish National Intelligence Organization (MIT), in order to collect information on a high-level security meeting about a possible Turkish intervention in Syria to protect a Turkish enclave there last year.

When asked about the report by the German-based Focus magazine asserting the NSA tapped Fidan’s phone and therefore collected the audio from the meeting, Kirby said: “We’re not going to comment publicly on every specific alleged intelligence or disclosure activity. I just — I would refer you to the National Security Agency for anything more.”

The revelation that the NSA allegedly eavesdropped on Turkish officials and made it public just days before the local elections caused outrage in Turkey, with many Turkish critics claiming that the Turkish government had deliberately covered up the spying to avoid domestic political repercussions.

Former President of Çanakkale University Sedat Laçiner claimed that the White House is aware of Turkey’s every move on Syria, adding that the Turkish government fears that this supposedly secret information could be put out in the open. The reason why Ankara does not react to the information is because of its weakness and also because “it knows what they know,” Laçiner underlined.

At the height of the electoral season in March 2014, Turkish politics was rocked by a secretly taped recording of a top-level security meeting at the Foreign Ministry.  The recording was posted online and featured a conversation between then-Foreign Minister Ahmet Davutoğlu, Fidan, Foreign Ministry Undersecretary Feridun Sinirlioğlu and Deputy Chief of General Staff Gen. Yaşar Güler.

Only hours after the conversation was posted online, then-Prime Minister and current President Recep Tayyip Erdoğan was quick to attribute the leak to the Gülen or Hizmet movement without showing any evidence for his suspicions. Davutoğlu also accused the Gülen movement of leaking the recording and described the act as espionage.

Former Culture and Tourism Minister Ertuğrul Günay, who turned against his former government following a corruption scandal that targeted Erdoğan and his inner circle, said the allegations that the Gülen movement was involved in the incident were dismissed after the revelation that the infamous recording was in fact the act of international espionage. Günay said all the false accusations are slowly emerging as being untrue and that these must have a cost. Günay recalled a report last year when Germany acknowledged that it eavesdropped on Turkish leaders and said Erdoğan’s response was that “great states listen to each other,” criticizing Ankara’s deafening silence on such embarrassing matters.

Günay added that Turkey has transformed into a “world of lies” in the past two years and that those who were the victims of defamation deserve an apology.

Former Turkish diplomat Osman Korutürk said the Turkish Foreign Ministry should have considered the possibility of wiretapping and taken necessary measures to prevent it. He noted that spying on other diplomats is an oft-seen scenario, but wiretapping “your own headquarters here at home is a grave incident that puts the government in a difficult situation.”

Korutürk stated that if a sensitive institution like the Foreign Ministry could be wiretapped by other states, it means there is a serious problem in the administration. “This is inexplicable,” Korutürk said, adding that the US also deserves to be condemned for spying on an ally such as Turkey.

Former Turkish Foreign Minister Yaşar Yakış also made similar remarks, arguing that diplomats should be able to always consider that they’re being wiretapped.

Yakış said he is not particularly surprised that other countries have tapped Turkish diplomats’ phones, something that has been done by enemies and allied states. He said a state just needs to take necessary measures to prevent this happening.

Main opposition Republican People’s Party (CHP) İzmir deputy Erdal Aksünger claimed on Friday that he saw NSA documents indicating that it spied on Erdoğan for eight-and-a-half years. He said without counter-measures, this type of spying could make Turkey’s security vulnerable.

Kirby was also asked to comment on this week’s meeting in Ankara between Turkish officials and a US delegation led by US Special Presidential Envoy for the Global Coalition to Counter the Islamic State in Iraq and the Levant (ISIL) Gen. John Allen. In response to the question, Kirby said the US delegation and the Turks held a series of constructive meetings, in which the parties discussed their mutual efforts in the coalition against ISIL. He added, “I’m not going to detail all the various things that were discussed, but I think you can understand that — I mean, again, it was a pretty wide-ranging set of discussions about all the different challenges we’re facing against ISIL.”

Kirby did not confirm or deny allegations that the Turkish government had agreed during the talks to allow its military air base in İncirlik, Adana, to be used by US drones to strike ISIL targets in Syria. “I’m in no position to confirm any kind of decision in that regard,” said the spokesman on the claim.

With regards to the differences between Turkey and the US on Kurdish fighters in northern Syria, Kirby stated that the US understands Turkish concerns, adding: “It’s not something that we ignore. What our focus [is] on inside Syria is against ISIL. That’s the focus of the coalition effort. And I’d like to remind everybody that Turkey is a part of that coalition, not just a NATO ally but a part of that coalition, and they’re contributing to the effort.”

Kirby also pointed out Turkey’s “significant refugee problem” from Syria. Gen. Allen and US Department of Defense Under Secretary of Defense for Policy Christine Wormuth, along with a large delegation from the Pentagon, have been in Ankara this past week meeting with their Turkish counterparts, including Turkish Foreign Ministry Undersecretary Feridun Sinirlioğlu. The Turkish and US delegations had an eight-hour-long meeting on Tuesday and continued their discussions on Wednesday and Thursday.

The Turkish daily Cumhuriyet reported on Thursday that Ankara agreed to let US armed drones that are deployed at İncirlik Air Base be used against ISIL. Speaking to the A Haber TV channel in late June, Turkey’s Foreign Minister Mevlüt Çavuşoğlu talked about the presence of armed US drones at İncirlik, adding that the drones were being used for gathering intelligence and that it was natural that they were armed, given the threats in the region.

According to Cumhuriyet, Turkey and the US are close to a deal on using the base, but Ankara wants the US to support the Syrian opposition, especially around Aleppo, as a precondition to its assistance.