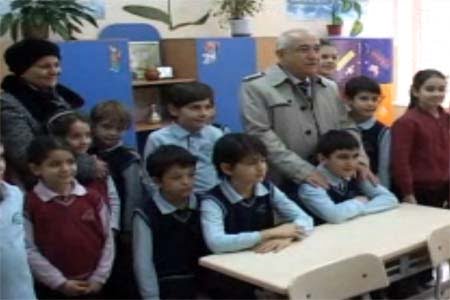 Accompanied by his wife Gulten Cicek and a delegation of deputies, Cicek was greeted with the Slavic traditional bread and salt welcome ceremony by students from nine different nations. The students greeted the guests in their native languages and led the way to a school tour.

Following a briefing on the school by Meridian International Schools Board President Hasan Huseyin Kenes, Cemil Cicek spent some time in a classroom of Turkish-born students. Cicek answered the students’ questions as he conversed with them.

Later during the visit, the guests watched the singing, poem recitation and dance performances by students and their teachers. They were moved to listen to the Turkish national anthem by the poetry champion of Turkish Olympiads Ukraine finals, Yevgeniya Sevcenko. After conversations with the school teachers and officials, the speaker Cicek signed the guestbook of the school and posed for a souvenir photo with them.

On April 4, Cemil Cicek and the delegation of deputies from four parliament parties kicked off the series of official visits on various levels by visiting the Ukrainian President Viktor Yanukoviç. Next is anticipated to be a meeting with Ukrainian Parliament President Vladimir Ribak and Prime Minister Nikolay Azarov, during which a parliamentary partnership protocol is to be signed. The delegation will depart for Crimea Autonomous Republic on April 6.

Established in 2001, Meridian International Schools offer education to 430 students from 28 different nations. 98 Ukrainian as well as 13 Turkish teachers are employed at the school located in the historic district Podil in Kiev.

Source: [in Turkish] on Cihan, April 4, 2013. English translation is retrieved from HizmetMovement.Com

The motive behind Maarif Foundation is to use it as a tool to pressurize African countries to transfer ownership of Hizmet movement linked schools to the Maarif Foundation since the request for the closure of these schools were turned down for lacking in merit.