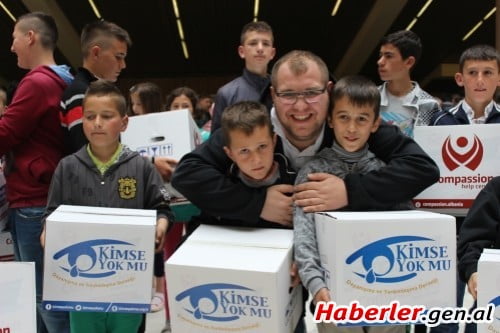 In commemoration of Orphans Day in Albania, Kimse Yok Mu Foundation brought smiles to the faces of a total of five hundred orphans and their families, who arrived in the capital Tiran from 36 cities across the country. In attendance of the event held in cooperation with the local Compassion Foundation were the Albanian PM Edi Rama, the parliament speaker Ilir Meta, the US, Kuwait and Qatar’s ambassadors to Tiran, and UNESCO officials along with prominent figures of the nation. One hundred orphans sang the song Xhomadini exclusively composed in honor of the country’s 100th anniversary. Also, the visually handicapped Diego Zelka’s performance got the audience emotional.

The Albanian PM Rama recalled May 20th has been marked as Orphans Day in Albania, since the orphans were entrusted to the country in 2006. “I would like to thank the organizing KYM, Compassion and Albania’s National Orphans foundations. From this day on, we too will start projects for our orphans and their families and support them socially and financially. I would like to wish a happy Orphans Day to our orphans in this room and all,” Rama said.

Next, the speaker Ilir Meta said, “You may not have your fathers with you now but we are here for you. I would like to thank KYM for holding this gathering. We are happy that it’s under the auspices of the Albanian Parliament.”

Speaking on behalf of the foundation, KYM’s international relations coordinator Metin Cetiner said, “Turkey and Albania have long-established relations. We still have Albanian people living in Turkey and vice versa. We feel like home here. We’ve been working for educational, medical, humanitarian and permanent aid for Alabanians. We seek to support these children with orphan projects worldwide and secure them a future. We are happy to be with our orphans today.”

Following the event, the KYM officials paid a visit to the parliament speaker Meta, whose grandfather had lived in Turkey for 50 years. “I am happy to partner with KYM, which has an international prominence, for Orphans Day. We would like to continue our partnership in future projects.”

KYM had earlier launched Gunseli Kato Vocational Training Center offering training in 20 different departments, in Albania. The center aims to help women financially or socially in need in their integration to the society.