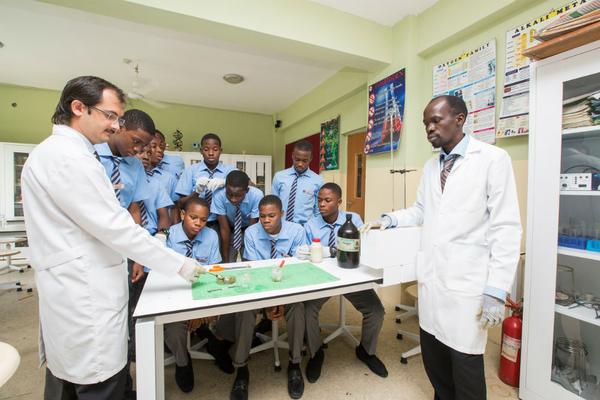 Speaking with Today’s Zaman during a visit to İstanbul, Nwaobiala said Turkish schools in Nigeria have been providing quality education to Nigerians for years but that more are needed, as the present number of schools is not sufficient for a country with a population of approximately 170 million. At present, there are only 16 educational institutions, varying from pre-schools to high schools and a university, run by Turkish company Sürat Educational LTD.

Asking Turkish educators to share their experiences with his country, Secretary Nwaobiala, said, “We want to build an Africa which will contribute to world peace. We also want to build these schools across Africa to help the continent to develop.”

Dr. Khalid Abubakar Aliyu, secretary-general of the Jama’atu Nasril Islam (the Society for the Support of Islam), an umbrella group for the Muslim community in Nigeria, also told Today’s Zaman that they are closely watching the Turkish schools in Nigeria and that they are happy the schools are raising a well-educated generation in Nigeria. Speaking about the demands from African nations that the Turkish government close down the schools, Aliyu noted that Nigeria is an independent country and will reject any such demands as being inappropriate. According to Aliyu, the ruling Justice and Development Party (AK Party) government’s fight with the faith-based Gülen movement, popularly known as the Hizmet movement, doesn’t affect the educational activities of Hizmet in Nigeria. Aliyu added that he was recently in the Nigerian capital of Abuja to distribute prizes for a Mathematics Olympiad organized by these schools and will continue to support Hizmet activities in his country.

As part of a smear campaign against the Gülen movement, inspired by the views of prominent Turkish Islamic scholar Fethullah Gülen, ruling AK Party government members and President Recep Tayyip Erdoğan, during their visits in 2014, asked African country leaders and officials to close the Hizmet-affiliated schools in their countries.

Since a major graft probe was revealed on Dec. 17, 2013, AK Party circles and Erdoğan have accused members of the Gülen movement, especially sympathizers in the judiciary and police forces, of attempting to overthrow the AK Party government. Sons of ministers, politicians, businessmen and members of the AK Party and of Erdoğan’s inner circles were detained during the graft investigation in 2013.

Meanwhile, Rosa Teixeira Goudiaby Vaz, wife of President of Guinea-Bissau José Mário Vaz, recently paid a goodwill visit to the Escola Internacinal Horizonte, the Turkish school in the capital of Bissau, and thanked the Turkish people for their contribution to the development of her country’s education.

Visiting the Turkish school with a large retinue, Vaz explained that the school administration and the Turkish charity Kimse Yok Mu Foundation had collaborated to help the people of Guinea-Bissau without discriminating against them in any way. “We, people of my country and especially those in need, will never forget the help of the Turkish people,” Vaz said.

Ramazan Özel, the director of the school, promised in his welcoming speech that the education the school offers will continue to be available in Guinea-Bissau. Özel also invited the first lady to pay a visit to Turkey.

Parents İsmail and Seval Topçuoğlu are seeking TL 40,000 in damages from the Education Ministry for violating students’ educational rights by adopting a new regulation about dershanes (prep schools), claiming it aims to bypass a top court’s ruling to annul a controversial law to close down the schools.