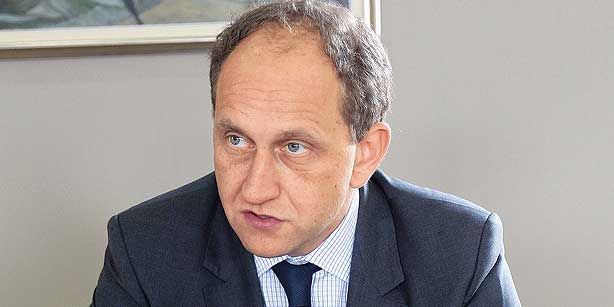 The vice-chairman of the Liberal Group in the European Parliament, Alexander Graf Lambsdorff, who represented his group in the meeting with Prime Minister Recep Tayyip Erdoğan on Tuesday, said he was not convinced by the arguments put forward by the Turkish prime minister to explain the corruption cases which erupted on Dec. 17 and the unfolding events afterwards.
The German politician, who is also his group’s shadow rapporteur on Turkey, said the prime minister’s theories were not “proper arguments.”

Lambsdorff, who was present at the heated debate with Erdoğan in the European Parliament and posed questions to the Turkish prime minister, said in an interview with Today’s Zaman that he was not convinced by his arguments for basically two reasons.

Stating that Erdoğan had in length talked about the success of the Turkish economy and said the fact that the Turkish economy had quadrupled in the last decade was proof of the lack of corruption, Lambsdorff said this was “unconvincing.” Erdoğan’s argument that the removal of so many police officers and prosecutors was the result of normal procedures was also not helpful, according to Lambsdorff. “This gives the impression that there is interference in the judiciary. It does not look normal,” he said, stressing that they were “very concerned” about the independence of the judiciary, the separation of powers and the rule of law and would closely monitor developments regarding the Supreme Board of Judges and Prosecutors (HSYK).

The German Liberal said Erdoğan seemed very confident of himself and that he believed the Turkish prime minister might not have an accurate analysis of the real situation in Turkey in terms of the independence of the judiciary, press freedoms and Internet regulations, just to name a few of the problems. Lambsdorff raised the question of why Erdoğan had to change almost half of his Cabinet if no corruption had taken place. “It will be very surprising for a country like Turkey coming from a modest economic background not to have corruption when it grows so fast. In such cases, corruption does not get less, but on the contrary. It will be surprising if there is no corruption at all. It is natural,” he said.

Stressing that Erdoğan was mistaken in his analysis both by comparing Turkey with other emerging markets and by the fact that so many high-ranking public officials had to resign, he said, “We got the impression that he is not prepared to agree to pursue corruption charges.”

Referring to the Gezi Park incidents of last summer, Lambsdorff said it was worrying to see once more Erdoğan calling Gezi Park demonstrators “terrorists.” “We followed what happened in Gezi and I do not share his analysis. Calling all those people ‘terrorists’ is unacceptable,” he said.

He added that they had the impression that Erdoğan was really determined to fight against the Hizmet movement, a civil movement inspired by Islamic scholar Fethullah Gülen, and that Hizmet was clearly his target.

Lambsdorff also said they have tabled an amendment for the Turkey progress report prepared by Dutch Christian Democrat Ria Oomen-Ruijten calling on the Hizmet movement to improve its transparency.

The Brussels-based Intercultural Dialogue Platform (IDP), whose honorary President is Mr. Fethullah Gülen, made a statement last Monday announcing its support for the Liberals’ amendment concerning the Hizmet movement.

Erdoğan had a hard time convincing the EU, who were also concerned over the revelation of documents indicating the government’s interference in the judiciary.

The Journalists and Writers Foundation (GYV) has responded to a series of controversial claims and slanderous accusations that aim to associate the faith-based Gülen movement, also known as Hizmet movement, with the terrorist Kurdistan Workers’ Party (PKK), stressing once again that Hizmet rejects all kinds of violence.