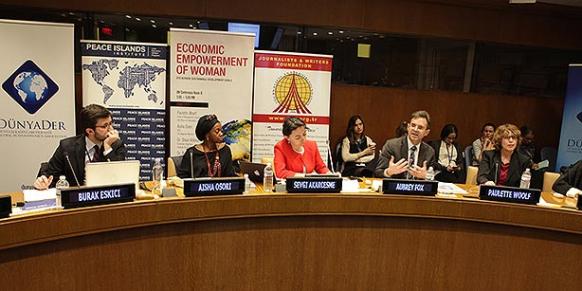 Panelists discuss the economic well-being and social status of women at a forum jointly held by DunyaDer and GYV at the United Nations in New York. (Photo: Cihan)

The panel on the economic empowerment of women was held as a side event of the 59th Commission on the Status of Women (CSW) to raise awareness on the implementation of the Beijing Platform’s goal of increasing the role of women in the economy. Following the introductory remarks of entrepreneur and President of DünyaDer Esra Kavurmacı on the importance of men’s support in empowering women, Paulette Woolf, chief of Management Support Services at the UN Office of Information and Communications Technology, gave a presentation on the role of mobile technology in the development of women’s role in business. According to Woolf, although affordable technology is essential for women in business, overall, women lag behind men in the use of technology. For her, cultural stigmas as well as software that is not women-friendly influence this gap.

Executive Director of the United States office of the Institute for Economics and Peace (IEP) Aubrey Fox presented the relationship between the decline in female representation in the workforce and peace. According to him, the global cost of violence is enormous, and violence against women in particular continues to be a huge problem. Fox said that 11.3 percent of the global GDP is lost due to violence each year. According to the IEP’smeasurement, the cost of violence to Turkey has been $52.5 billion just in 2014.

Another panelist, Ayisha Osori, CEO of the Nigerian Women’s Trust Fund, pointed out her frustration with similar problems women face in Africa after providing figures on women in Africa. For instance, only 15 percent of women in Africa have bank accounts, and the continent still holds the largest share of global poverty.
Dr. Burak Eskici from the department of sociology at Harvard University presented some of the findings of his field research in Turkey on the participation of local women in the activities of the grassroots Hizmet (Gülen) Movement. According to him, the volunteer work of women in the Hizmet movement is an example of self-realization of potential for many women.Dr. Eskici said that thanks to their involvement in the educational activities of the Hizmet movement, women redefined themselves.

In addition to women from various countries, independent deputy Hakan Şükür attended the panel to show his support for the empowerment of women.

GYV is the first and only civil society organization in Turkey to hold general consultative status from the UN, along with 146 other organizations across the world.

The Rumi Forum, an international organization promoting interfaith dialogue and peace, presented awards celebrating peace and dialogue initiatives at their annual Peace and Dialogue Awards ceremony in Washington on Tuesday. Bishop Desmond Tutu’s daughter Naomi accepted the Extraordinary Commitment to Dialogue and Reconciliation Award on behalf of her father, which she said her father accepted as a great honor.