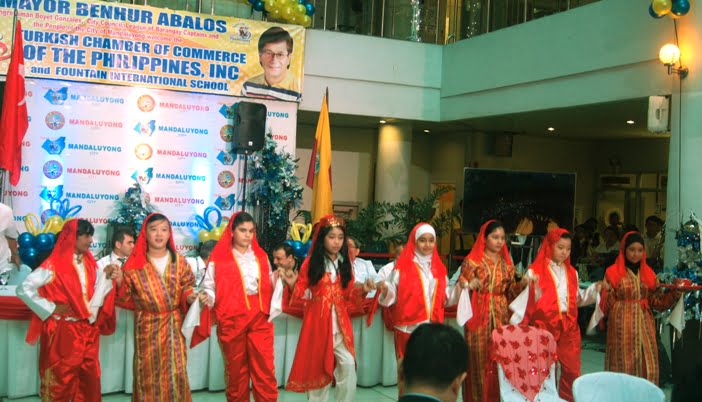 A Turkish cultural promotion event took place in the capital Manila, the Philippines. The event featured traditional Turkish dance performances, food, music, and a photography exhibition along with screenings on Turkey’s natural and historical attractions.

Under the auspices of Mandaluyong Governor, Benjamin C. Abalos, the event was attended by over one hundred Filipinos and a large number of Turks, including general manager and high school principal of Fountain International Schools, Malik Gencer and Mehmet Cetin respectively; Pacific Dialogue Foundation President, Ferhat Kazkondu; Turkish Chamber of Commerce of the Philippines, Irfan Karabulut accompanied by numerous Turkish and Filipino businessmen.

Governor Abalos, in his address, touched on Turkey’s thriving economy, education and rich history. He noted Fountain International Schools with their distinctive approach to education has strengthened the Filipino education system. The governor additionally said they as Filipinos once again witnessed how altruistic and considerate Turkish people are, seeing the aid they provided in the typhoon-hit regions. He expressed his thanks to Turks for their support.

Mandaluyong would like to import Turkish education system to the Philippines and thus cooperate with the local Turkish schools and those in Turkey, the governor revealed. They already kicked off the groundwork, he added.

Next, Turkish Chamber of Commerce President, Irfan Karabulut said, “We’ve organized various events promoting the Philippines in seven Turkish metropolis, with the participation of local state officials and businessmen. The conferences to date have attracted 1,740 attendees in total.” Speaking of the Turkish companies operating in the Philippines, the chamber aspires to invest in Mandaluyong too, he added.

The fact that the government practically stalled the investigation with a major reshuffle of the judiciary, police, watchdog agencies that track money, and finance and banking activities, while pushing emergency laws through Parliament to prevent further investigations and leaks, casts a shadow on how far the Erdoğan government had gone in these dirty deals.