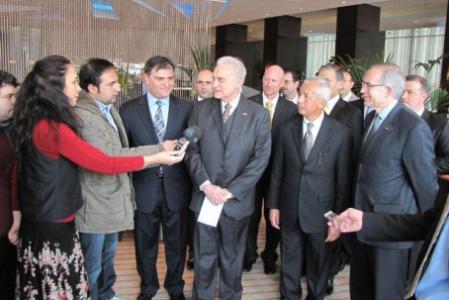 A business delegation of Houston-based companies is currently visiting İstanbul in a program organized by the Turkish Confederation of Businessmen and Industrialists (TUSKON) to discuss expanding trade ties and business opportunities with their Turkish counterparts.

The visit comes on the heels of the recently launched direct flights between Houston and İstanbul by Turkey’s national flag carrier, Turkish Airlines (THY). The carrier launched flights to Houston on April 1 when Turkish Economy Minister Zafer Çağlayan, accompanied by a number of business people, visited the US’s fastest-growing city to seek trade and investment ties.

In what can be called a return visit following the Turkish trade mission two weeks ago, the delegation, led by Houston Mayor Annise Parker, met with reporters in İstanbul on Thursday to share ideas for potential joint investment opportunities. Addressing the press conference, Parker highlighted that the US aims to capitalize on improving ties between the two countries. Underlining that Turkey and the city of Houston shared common interests in trade, the mayor added: “We are looking to expand multiple commerce and investment openings. The new direct service also enables our businesses and citizens to experience Turkey directly.”

The Houston business delegation, also supported by the Greater Houston Partnership (GHP) and the Texas Turkish American Chamber of Commerce (TTACC), includes firms from the energy, information technology, construction to infrastructure and logistics sectors. “An excellent opportunity” was how GHP World Trade Board head Eduardo Aguirre identified the THY flights and their visit that followed to cement ties between the US’s fourth-largest city and one of the world’s emerging economic powers like Turkey.

“It’s exciting when a world class carrier such as Turkish Airlines makes an investment and a commitment to a world-class city like Houston,” Mario C. Diaz, director of aviation for the Houston Airport System told the meeting on Thursday. TTACC President Celil Yaka told Today’s Zaman that they have hosted 2,300 Turkish businessmen in Texas over the last three years, adding that Turkish companies need to diversify trade ties with this part of the US, where economic activity is relatively more resilient. “There are Turkish-owned businesses as well in Houston and these are mostly active in construction and real estate. … Houston is a major manufacturing, aerospace, health and energy hub for the US; we need to excel our efforts in these fields as well,” he opined. Home to the US’s largest international trade port, Houston is Turkey’s second-largest US gateway. There are 174 firms in the Houston region operating 663 subsidiary locations in Turkey. Total trade between Houston and Turkey has increased at a compound annual rate of 16.8 percent since 2002, from more than $625 million in 2002 to nearly $3 billion in 2012.

Turkish-owned businesses in Germany should exert more effort to branch out into different world markets, a top Turkish union told entrepreneurs in Frankfurt on Thursday.