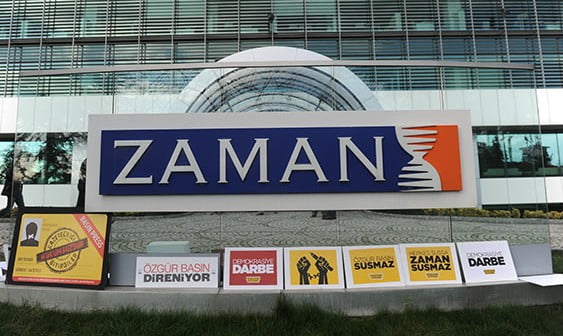 On Friday, March 4, 2016 the Turkish government seized control of Zaman Newspaper, the largest and highly circulated newspaper in Turkey. The takeover is a violation of the freedom of press which is vital for every democratic state and requires political intervention from the international community. Hours after police detained prominent businessmen affiliated with the newspaper, Istanbul prosecutors called for the appointment of new management, and a three member board to be appointed by the court. The takeover of Zaman newspaper has resulted to huge protests in Zaman Headquarters in Istanbul and other parts of the country.

In the past 2 years, The Turkish government received international criticism over its treatment of journalists, including putting serious pressure on media outlets for being critical of the government. On October 29, 2015, the government also took over Ipek Media Group on alleged charges of terrorism, suppression of the current regime and alleged financial investigation. Kanalturk and BugunTV were reportedly cancelled on that day as well. In addition, two prominent journalists from Cumhuriyet newspaper are facing potential life sentences on charges of endangering state security for publishing material critical to the government. According to Abdulhamit Bilici, Editor in Chief of Zaman Newspaper, he was very concerned that those speaking against government policies are prone to face court cases or prison. Mr. Bilici also stated that “this is a dark period for our country, our democracy”.

The takeover has already raised huge concern from Amnesty International, Freedom House and other prominent human rights organizations. Freedom House released a statement asserting that the takeover is a “flagrant violation of both rule of law and freedom of press”. Amnesty International’s Turkey expert, Andrew Garner stated that the organization is “deeply troubled” by the recent events and the decline of media freedom in Turkey.

We strongly urge the United States and the European Union take drastic measures to hold the Turkish government accountable for its actions towards press freedom and human rights. We believe that the attacks pose a threat to the country’s ailing democracy and urge the people of Turkey to speak out on political injustice.

BÜLENT KENEŞ June 14, 2012 For some time, Turkey has been obsessively talking about an alleged contention between the ruling Justice and Development Party (AKP) and the Hizmet movement (aka Gulen Movement). This matter is being discussed in dozens of newspaper columns and TV programs every day. The Hizmet movement’s demands are about principles. These […]