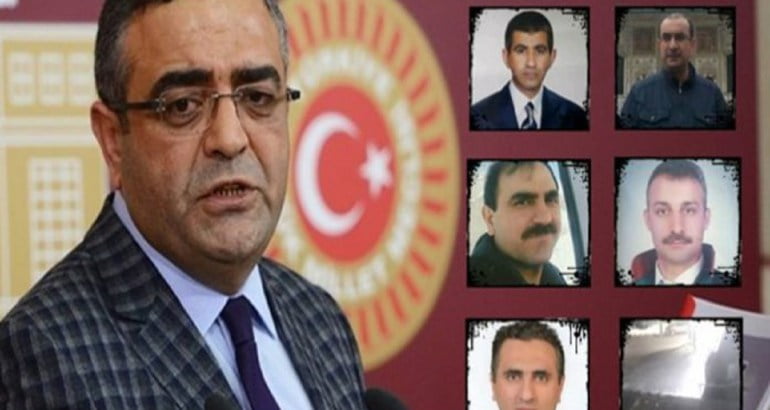 “The EU is closely following developments in Turkey on a daily basis. As for the reported cases of abductions, the EU has on many occasions stressed that any alleged wrongdoing or crime should be subject to due process and that the right of every individual to a fair trial needs to be respected,” said an EU spokesperson in response to a question about recent instances of abduction in Turkey.

On Thursday BBC reported on 11 cases in which people in Turkey have either been abducted in similar fashion or disappeared since January. Neither the Turkish Interior Ministry nor Ankara Governor’s Office responded to BBC’s questions on the cases.

“It is the responsibility of the Turkish authorities to investigate these reported cases and ensure that European standards and international law are respected,” added the EU spokesperson.

Recalling that one person was kidnapped in Ankara before a coup attempt on July 15, 2016, and six after it in similar ways, Tanrıkulu said: “They have not been heard from. It is said that despite evidence gathered by relatives of kidnapped and disappeared people, security footage and witnesses, no investigations have been launched. The security forces are reluctant to launch an investigation.”

Underlining that all of the kidnapped people were targeted by an investigation into the Gülen movement and suspended from their jobs by government decree, the CHP deputy said, “According to security footage and witness testimony, in all the kidnapping cases black Volkswagen Transporter vans were used, and all seven were followed by people whose faces can be identified in security footage.”

The most recent abduction reportedly took place in İzmir on June 16. Murat Okumuş, a 40-year-old accountant who was a manager at Şifa University Hospital in İzmir, which was closed down by the government, was abducted by individuals in several cars. One of the cars was a Volkswagen Caddy with a license plate starting with 45, while the other was a Toyota Auris, 20 AK 171, witnesses told his father.

Okumuş’s abduction came only a day after Cemil Koçak, another post-coup victim, was forced into a black van in broad daylight in Turkey’s capital province of Ankara.

A new study recently released by The Stockholm Center for Freedom (SCF) has revealed that Turkish government has resumed illegal abductions and enforced disappearances that were believed to be a thing of the past, primarily confined to the dark period of the 1990s, when mainly Kurds were victimized.

The brutal regime of Turkey’s autocratic President Recep Tayyip Erdoğan has now engaged in depriving many victims of their liberty without acknowledging their unofficial detention. This time the prime target is the vulnerable social group Gülen movement against which the Turkish government launched an unprecedented witch-hunt persecution since December 2013.

“In addition to mass torture and ill-treatment of tens of thousands of victims in detentions and prisons, now we started to see enforced disappearances in Turkey, sometimes on broad daylight, by security elements linked to the government,” Abdullah Bozkurt, the president of the SCF, has said.

According to SCF study, the motivations behind these abductions and disappearances appear to be twofold. On the one hand the Turkish government keeps up its campaign of intimidation by amplifying fear in the society. That frightens critics and opponents from adopting a critical position against Erdoğan and his associates in the government.

The second motivation on the part of the government is to elicit forced, fabricated and self-incriminating confessions, often written by the police in advance, so that it will help the government case in criminalizing opposition groups, primarily the Gülen movement participants, and facilitate the mass persecution of dissidents.

Turkey survived a controversial coup attempt on July 15, 2016 that killed over 240 people. Immediately after the putsch, the Justice and Development Party (AKP) government along with President Erdoğan pinned the blame on the Gülen movement.

At least 161,751 people were detained or investigated and 50,334 people were arrested in Turkey in the framework of the Turkish government’s massive post-coup witch hunt campaign targeting alleged members of the Gülen movement since the controversial coup attempt on July 15, 2016, according to statistics reported by state-run Anadolu news agency by basing on information taken from the officials from Turkey’s Justice Ministry on June 13. (SCF with turkeypurge.com) June 29, 2017