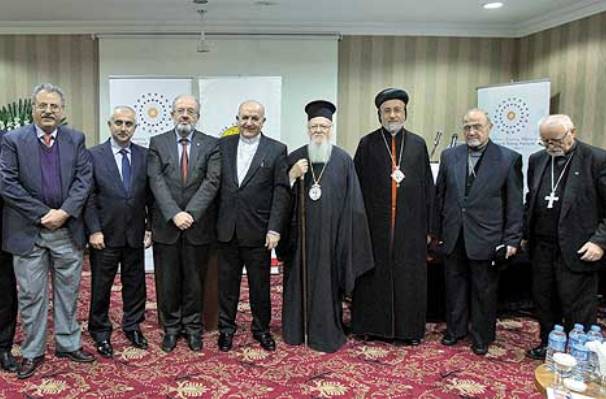 “Diyaloğun Meyveleri” (Fruits of Dialogue), a book by Deputy Patriarch of the Turkish Syriac Catholic Church Yusuf Sağ, was launched at a reception held at Taksim Green Park Hotel in İstanbul on Tuesday night.

Delivering a speech at the event, Bartholomew praised the role of Turkish Islamic scholar Fethullah Gülen in promoting dialogue among different faiths.

“Considering that an important goal of dialogue is to get to know each other and that the first steps were taken fearfully to this effect, we always remember the courageous approach of Fethullah Gülen with praise,” he said.

Voicing his wish for an increase in the number of people who work to develop feelings of empathy and understanding, he said the event, organized by KADİP for the “Diyaloğun Meyveleri” book, is the concrete and meaningful result of dialogue.

The writer, Sağ, said his book explains what dialogue means. Giving some information about the content of the book, he said he tried to highlight the importance given by Gülen to education and hard work in his book.

Sağ said: “They [followers of the Hizmet movement inspired by Gülen] are working for the welfare, peace and happiness of humanity. Gülen is, too. I set out with a belief in this. This book is a summary of their efforts.” He offered his thanks to everyone who helped him write the book.

The Hizmet movement is a group of volunteers engaged in interfaith and intercultural dialogue inspired by the ideas of Gülen, whose teachings promote mutual understanding and tolerance between cultures. Now residing in the US, Gülen has pioneered educational activities in a number of countries, along with efforts to promote intercultural and interfaith activities around the world.

The GYV’s Yeşil, who also spoke at the event, said dialogue is not a preference but an obligatory choice.

“We have never seen dialogue as something we do in our spare time. We saw it as an obligatory thing. We saw it as a practice whose absence cannot be compensated,” he said.

Armenian Orthodox Archbishop Ateşyan said there is need to join in dialogue for the benefit of humanity even if dialogue efforts prove fruitless.

“We will eat that fruit [of dialogue]. This book shows us a path. We need the views of every wise person. I offer my thanks to the GYV for playing a role in this holy mission,” he said.

The 123-page-long book is divided into three chapters titled “Meaning of dialogue,” “Dialogue works” and “Dialogue: a solution, an approach or search?”