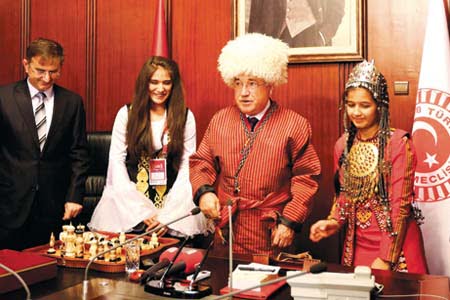 Students coming from all round the world to participate in the 11th International Turkish Olympiad, a festival that celebrates the Turkish language and which this year brought together 2,000 students from 140 countries around the world, visited Parliament Speaker Cemil Çiçek and organizations in Ankara on Monday.

A group of students went to Parliament on Monday to visit Parliament Speaker Cemil Çiçek, who gave them a warm welcome. Sending his gratitude to all who contributed to the 11th Turkish Olympiad, Çiçek said: “The scope of the Turkish Olympiad is expanding every year. Year after year the number of countries participating in the festival is increasing and in a few years we could have up to 150 countries participate. … I am watching the performances of students from around the world with pride and admiration.”

Stating that previously the Turkish language was only spoken in Turkey and Turkic countries, Çiçek said now the language is spoken by people all around the world, thanks to the Turkish Olympiad. Çiçek also praised the organization behind the Olympiad, noting that countries have four to five years to prepare for an international sport event, but the Turkish Olympiad is held every year thanks to great effort. “Organizing such a big event each year is not easy. The organizers are able to complete the Olympiad faultlessly without any difficulty every year. We, as the Turkish nation are aware of this and we admire their efforts. I want to thank all the people who contribute to the organization of Turkish Olympiad.” Çiçek noted.

Çiçek was presented with traditional clothing from Turkmenistan as a gift from the students, which he wore and posed for photographs with the students.

The Turkish Olympiad participants and their teachers also visited the Civil Servants’ Trade Union (Memur-Sen) and the Turkish Public Workers’ Labor Union (Kamu-Sen) on Monday. First, the students went to Memur-Sen headquarters, where they were welcomed by many of Memur-Sen’s members and where the students staged their Olympiad performance. Speaking during the visit, Memur-Sen President Ahmet Gündoğdu said that Turkey celebrates 11th Turkish Olympiad, which is a great example of the devotion of the teachers and that the Olympiad increases the hope for universal peace. Gündoğdu thanked all the instructors teaching Turkish to students at Turkish schools all around the world and also thanked well-respected Turkish Scholar Fethullah Gülen for his contributions to the Olympiad.

Bodrum is ready for Olympiad joy

In the meantime, the tourist attraction district of Muğla, Bodrum is getting ready to host a performance of 100 students from 20 different countries as part of the Turkish Olympiad on Tuesday. The children will call for universal peace from Bodrum’s 2,500-year-old amphitheatre.

Mayor of Bodrum Mehmet Kocadon said that they are very happy to host the 11th International Turkish Olympiad. “They come from not only different counties, but different continents, with the purpose of expanding peace and unity,” said Kocadon as he thanked everyone who contributed to the event.

The governor of Bodrum, Mehmet Gödekmerdan stated, “I cannot think of a better way to make the Turkish language, culture and civilization known in the world.”

Some participants from 40 different countries met in a mall in the central Anatolian town of Kayseri for a performance on Sunday. The students, who sang Turkish songs, read poems and danced, received a great deal of interest from the local people. Spectators took a lot of photos with the participants from different countries in their national costumes.

The 11th Turkish Olympiad, which is organized by the International Turkish Education Association (TÜRKÇEDER) each year as part of the International Language and Culture Festival, will be held between June 1 and 16. A total of 99 activities will be held in 55 cities across Turkey during this 16-day period. The large inauguration ceremony was held to mark the start of the Olympiad in Ankara on Saturday and included the participation of several ministers and many other high-ranking government officials, as well as about 20,000 spectators.

The Bergsonian philosophy had been a sanctuary for our intellectuals who used it to dispense with the “despair and darkness” in the face of the psychology of defeat stemming from the fall of the Ottoman Empire and drive the spiritual and psychological revival during the War of Independence.