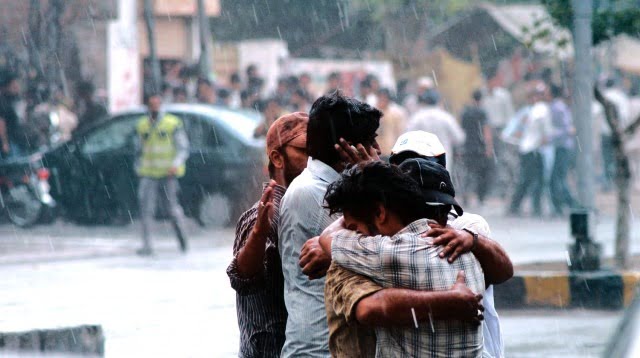 The carnage that snuffed out lives and blew bodies into shreds in an airport and a metro train in Brussels by Islamic State terrorists, the unabated bombings in the Middle East, and lately, the killing by a Taliban suicide bomber of 67 Christian Easter Sunday worshippers in Pakistan have further aggravated unspeakable rage around the world. So must these unforgiveable inhuman acts bring grief to the heart of Fethullah Gulen, a Turk considered one of the world’s 100 most important influential people advocating moderation in the Muslim world.

In a discourse delivered shortly after IS massacres, Gulen said, “As the group that calls itself Islamic State, known as ISIS, continues to produce carnage in the Middle East, Muslims must confront the totalitarian ideology that animates it and other terrorist groups. Every terrorist act carried out in the name of Islam profoundly affects all Muslims, alienating them from fellow citizens and deepening the misperceptions about their faith’s ethos.”

“It isn’t fair to blame Islam for the atrocities of violent radicals,” he said. “But when terrorists claim the Muslim mantle, then they bear this identity, if only nominally. Thus members of the faith must do whatever is possible to prevent this cancer from metastasizing in our communities. If we don’t, we’ll be partly responsible for the smeared image of our faith.”

He argued that “a real Muslim, one who understands Islam in every aspect, cannot be a terrorist … for Islam does not approve of the killing of people in order to attain a goal … and therefore all of these tenets and interpretations require revision and renovation by cultivated people in their fields.”

Gulen said, “It should be made clear that Muslims cannot be terrorists. Why should this be made clear? Because people must understand that if they do something evil, even if it is as tiny as an atom, they will pay for that both here and in the Hereafter.”

Gulen is recognized as “an Islamic scholar, preacher and social advocate whose decades-long commitment to altruistic community has inspired millions in Turkey and around the world. One of the world’s most important Muslim figures, he has dedicated his life to interfaith and intercultural dialogue, community service and provided access to quality education.”

Gulen was the first world teacher in the tradition of Islam to publicly condemn in the Washington Post the 9/11/01 terror attack upon the World Trade Towers in New York City and to call for global peace.

In April last year, Gulen was the recipient of the 2015 Gandhi King Ikeda Award for Peace. At his conferment, Dr. Lawrence Edward Carter Sr. said the award recognized Gulen for his “interfaith and cross-cultural dialogue about science, democracy and spirituality and opposition to violence and the misuses of religion as political ideology have made (him) the humanizing face of Islam.”

The Gandhi-King-Ikeda Institute for Global Ethics and Reconciliation was created to serve as a conference and multicultural institute with its center based at the MLK International Chapel at Morehouse College in Atlanta, USA, to discuss perspectives  affecting people’s “common humanity.” It also ensures to honor the life, work and philosophies of great leaders such as Martin Luther King Jr. , Mahatma Gandhi and Daisaku Ikeda. Gulen’s name is now linked to the three leaders.

Mohandas Karamchand “Mahatma” Gandhi (1869-1948) is viewed as the greatest world leader of the last 1,000 years. By the use of nonviolence, fasting and religious tolerance, he developed and tested the means for ending the era of colonial domination and imperialism. His civil disobedience and nonviolent demonstrations in South Africa and India won independence for 400 million Indians from three centuries of British rule.

Martin Luther King Jr. (1929-1968) worked “assiduously to redeem the soul of America.” He engaged in civil disobedience, and inspired protest movements for civil and human rights. His commitment to peace and justice received widespread acclaim. TIME Magazine recognized him as “Man of the Year” in 1963. He received the Nobel Peace Prize in 1964, and became the only non-elected American to be recognized with a federal holiday in 1963.

Daisaku Ikeda (1928-) is a leading Buddhist philosopher, author, poet and educator. He is president of the Soka Gakkai International (SGI), a lay Buddhist association of more 12 million members in 163 countries and territories around the world. He is the founder of several educational, cultural and research institutions.

In 1947, at the age of 19, Ikeda joined Soka Gakkai (meaning society for the Creation of Value), and under the influence of Buddhist philosopher Josei Toda, helped shape the movement for peace, culture and education. He has received numerous honorary doctorates and awards, including the United Nations Peace Award, the International Tolerance Award of Simon Wiesenthal Center and the Rosa Parks Humanitarian Award.

Joining the ranks of these leaders is Gulen (1941-), who was born into a humble family in Erzurum, Turkey. He studied natural science, Eastern and Western philosophy, as well as Islamic tradition in his early years. He moved to Edirne in the late 1950s and to Izmir, Turkey’s third largest province, in 1960, where he started to crystallize his views. The commemorative program at his Gandhi King Ikeda Award awarding ceremonies cites his activism and discourse as attracting the attention of learned and common people. From mosques to conference halls, Gulen discussed issues ranging from religion, peace, education and science, to the economy, and other pressing social issues of the time, especially social justice.

The Gulen movement, also called Hizmet movement, impressed philanthropists from around the world who give it generous financial support to keep its programs going.

Many of Hizmet students have won major international math and science competitions. In conflict-ridden regions of the Philippines, Macedonia, Afghanistan, Iraq, and Bosnia, hundreds of Hizmet schools are said to be “bastions of inter-religious and interethnic harmony.”

Gulen advocates the education and empowerment of women. Hospitals built by Hizmet supporters have provided affordable access to quality health care with volunteer doctors bringing free medical care to areas in desperate need. A major relief organization within the Hizmet initiative has mobilized thousands of volunteers and financial donors to bring aid to disaster victims in Southeast Asia, South America and Africa.

Gulen rejuvenated the Turkish tradition of interfaith dialogue. One of the core tenets of his teachings is the celebration of religious, cultural, social and political diversity. Gulen considers this diversity as “divine will”. According to him, “You must have a seat for every person in your heart.”

Gulen’s lifelong work on interfaith cooperation has earned him recognition from Christian and Jewish leaders in his homeland Turkey and a personal audience with the late Pope John Paul II.

Gullen is the recipient of New York-based East-West Institute’s 2011 peace award. In 2008 he was ranked No. One in Foreign Policy and Prospect magazines’ joint poll of the “Top 100 Public Intellectuals.” In 2013 he was awarded one of TIME Magazine’s most influential people in the world as the “most potent advocate of moderation in the Muslim world.”

He currently lives in relative solitude at a retreat facility in Pennsylvania, where he dedicates his time to reading, writing and personal worship, and to promoting shared values, dialogue and peace.

The Guinean minister for social action, women and children Sanaba Kaba was also present in the aid distribution event.