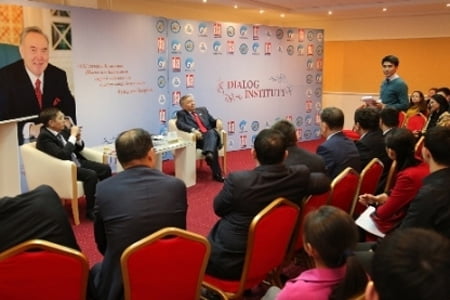 A new dialogue institute has been launched within Eurasia State University in Astana. The institute, jointly founded by Dialogue Eurasia Platform, Kazakhstan Historians Association, Kazakhstan Theologians Association and Kazakh TV will offer classes on the lives and contributions of influential personalities in the fields of history, politics, and philosophy.

Eurasia University Rector Yerlan Sidikov at the opening ceremony noted that the institute under their umbrella will achieve a lot in dialogue. Kazakhstan Senate Deputy and Dialogue Eurasia Platform Kazakhstan Committee Chair Garifolla Yesim kicked off the class series with his lecture on the major items in Kazakhstan President Nursultan Nazarbayev’s “2050 Development Strategy”. Speaking of the institute and its missions, Yesim additionally said “I hope this institute, where the people who contributed to humanity and their lives based on peace and tolerance will be analyzed, will inspire the youth, in deed, architects of the future.”

Charley Honey | The Grand Rapids Press | Saturday, July 30, 2011 The meal was incredible: savory lentil soup, two kinds of bread and salad, stuffed peppers, a scrumptious chicken casserole and a tasty pudding called muhallebi, followed by black tea in dainty glass cups. When you eat like this, you know you’re in Turkey. […]