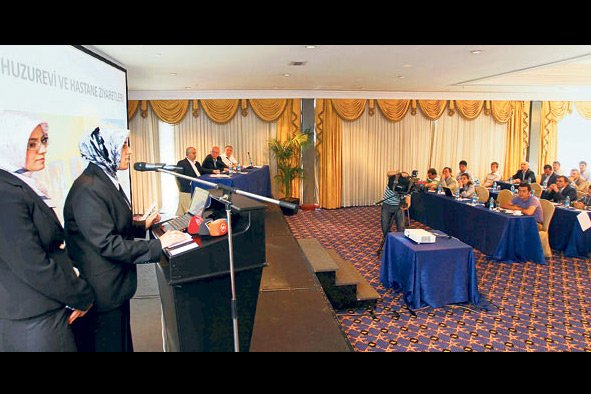 The Journalists and Writers Foundation (GYV) held an annual meeting with members from around the world on July 9 in İstanbul.

Turkish intercultural and interfaith organizations from 66 countries around the globe pledged to continue efforts to contribute to global peace and dialogue in a historic gathering in İstanbul on Saturday, sharing experiences that might help guide their future dialogue activities.

“We only aim to contribute to peace and to serve humanity,” Mustafa Yeşil said at the opening speech. Yeşil is the chairman of the Journalists and Writers Foundation (GYV) and the sponsor and host of the event, “International Meeting on Sharing Experience of Coexistence,” which featured 54 participating and 11 observer countries.

Inspired by esteemed Turkish Islamic scholar Fethullah Gülen, Turkish activists have established intercultural and interfaith organizations in more than 100 countries all around the world, mostly in the past decade. The primary objective of these organizations and their activities is to promote Turkish culture, encourage tolerance and build bridges across different ethnic and religious groups.

Yeşil told participants that humanity is now witnessing how an Anatolian movement is transforming into a global peace project, adding that the dialogue organizations affiliated with this movement have always promoted educational activities.

Listing three “fundamental problems,” which he said must be tackled urgently, Yeşil said intercultural organizations have been fighting to eradicate poverty, conflicts and ignorance. The GYV chairman said the dialogue organizations have demonstrated that they are effective in fighting against ethnic, religious and cultural conflicts, stressing that the organizations wanted to share their experience to see to what degree these institutions are serving peace in the world.

Yeşil underlined that differences should not be a cause of conflict, urging people to come together, discuss and solve issues through talking and understanding each other. Lauding the activities of the dialogue organizations, Yeşil said, “We are now witnessing how warmly these people are welcomed.”

According to Yeşil, these institutions have gained the trust of public institutions in the countries in which they operate and have boosted Turkey’s reputation by promoting Turkish culture. He dismissed claims that these organizations have a pan-Turkist and pan-Islamist agenda, arguing that the dialogue organizations are seeking to show people ways to coexist together peacefully.

This meeting is the second of its kind and the first one that was open to the media. Some of the representatives of the dialogue organizations from all around the world presented their activities, followed by discussions on how to make these activities better and more productive.

Unveiling the financial sources of these activities, Yeşil said businessmen only in the countries where these organizations operate fund the activities, which include seminars, conferences, cultural nights and cultural trips.

The representatives said the main dialogue activities of their organizations are cultural trips and conferences. The conferences and panel discussions are primarily academic in content and usually feature issues related to Gülen’s ideas, religious co-existence and inter-faith dialogue. The representatives quoted people with whom they have had contacts as part of their dialogue activities who praised the Turkish people involved in these works.

The representatives said the participation of government officials, sometimes ministers, showed how well their activities are received in the countries in which they serve they serve.

Ahmet Kurucan, who was representing the US at the event, said there is no term like “foreigner” used in the US because everyone there is part of a distinct identity, clustered in different parts of the US. Kurucan said he is based in New Jersey, but he is representing dozens of dialogue and cultural organizations in the US.