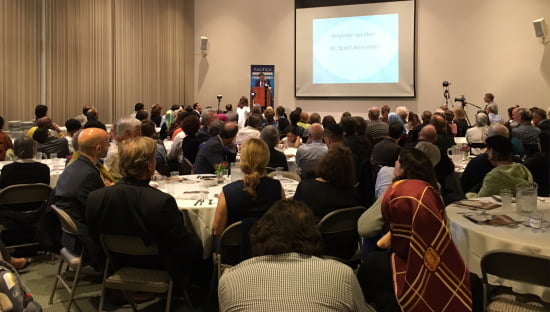 Dates, rice and eggplant moussaka for birthday dinner? It works.

A recent birthday of mine happened to coincide with a long-planned Ramadan Interfaith Iftar Dinner co-hosted by Pacifica Institute and Calvary Presbyterian Church in San Francisco. Since I was minimally involved in the planning and execution of the event, and maximally involved in the birthday, it made sense to combine the two. Plus, I got a lot of mileage out of responding to questions about birthday plans with news we were expecting 225 or so friends for dinner.

The eventual total number of guests will remain a mystery, because so many kept showing up without reservations and we were simply told not to turn anyone away. Attendees were predominantly Muslim, but included a substantial number of Catholics, Protestants, Jews and Buddhists. (“You know the difference between a Buddhist and a non-Buddhist?” quipped Rev. Ron Kobata of the Buddhist Church of San Francisco; “The non-Buddhist thinks there is a difference.”)

This was not just a celebratory dinner, it was an Iftar dinner, the sunset meal at which Muslims break the fast they have observed since sunrise. To be clear about it, sunrise on June 8th in San Francisco was at 5:48 AM, and sunset was at 8:37. That is considerably longer than this weak-willed Christian generally goes without sustenance. Having had a perfectly good lunch, and  swiped a half-dozen or so dates while putting bowls on the tables, I still had to sneak a glass of milk from the kitchen to keep from fainting away at the welcome table. 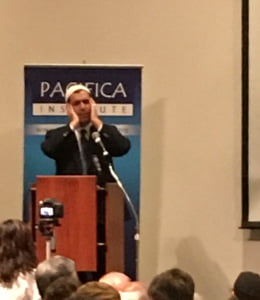 Given that dinner would not be served until after the call to prayer at 8:37, the program preceded the meal. It included a video about Pacifica Institute, which was founded in 2003 by a group of Turkish Muslims dedicated to social justice, interfaith cooperation, relationship-building and partnership for the common good – any tiny advancement of which would make a pretty fine birthday present for anybody. Pacifica is aligned with the worldwide Hizmet Movement (“the Service”) which promotes service to humanity regardless of faith, tradition, gender or ethnicity.

We also saw a video about how fasting strengthens one’s spirituality in multiple ways. Muslims observe the fast – abstaining from food, drink, smoking, sexual activity and bad behavior including lying or cursing – every day during the month of Ramadan; which does not exactly compare with giving up chocolate for Lent.

Keynote speaker Dr. Scott Alexander, Assistant Professor of Muslim Studies at Catholic Theological Union in Chicago, spoke to the evening’s theme: The Art of Living Together. “Sharing the joy of fasting,” he said, “fills us all with hope. It stands in opposition to the strident voices of hatred that want us to believe our troubles are the fault of others.” Alexander ended with a prayer that “God will allow others different from ourselves in all ways to touch our hearts.”

One of the co-leaders of the event, who served as MC along with Pacifica Institute’s Fatih Ferdi Ates, was Calvary member Robin Morjikian, whose father is Armenian. Ates, when thanking her, noted that the evening involved the daughter of an Armenian working with a group of Turkish Muslims on an event held at a Presbyterian church and featuring a keynote speech by a professor from a Catholic University. Buddhist Rev. Kobata presented awards to three honorees.

In lieu of birthday cake, dessert consisted of mixed fruit and baklava. I’m not sure how next year’s birthday will stack up.

Rethink Institute has launched a new research program, Future of Islam, to debate and address the most critical questions, share ideas, and offer solutions to salient issues related to the future of Islam and Muslims. Forum on the Future of Islam has been established as the deliberative component of the program whereby prominent experts and leaders meet annually […]