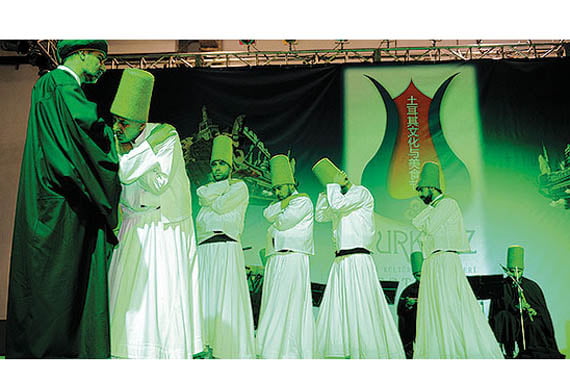 The Turquoise Turkish Culture and Food Festival kicked off in Shanghai on Sunday as part of 2013 Year of Turkish Culture activities, providing Chinese people with the opportunity to find out more about Turkey.

The first day of the event, held at the Shanghai Mart, saw a large attendance comprising both locals and Turks living in China, despite the rainy weather.

Various booths were set up to promote the provinces of Şanlıurfa, Bursa, Denizli, İzmir, Konya, İstanbul and Ankara.

The event kicked off with a concert by an Ottoman military band. This was followed by Turkish folk dances, an Ottoman fashion show and a performance by whirling dervishes.

Meanwhile, Sultan Kösen from Turkey’s Mardin province, who is officially recognized by the Guinness World Records as the tallest man alive, also joined the Turkish delegation visiting Shanghai for the festival. Kösen, who is 2.51 meters tall, was the focus of great attention, with many Chinese people eager to take a photograph with him.

A Chinese visitor named Sun told the Turkish media that she really enjoyed Turkish ice cream, while Wang, another visitor, said he admired every aspect of the organization of the festival and found the döner kebab, which he tasted for the first time in his life, very delicious.

Shanghai Chamber of Manufacturers and Importers Chairman Feng Zheng Zhou, speaking at the opening ceremony of the festival, was applauded when he said: “Blue sky, blue sea and Blue Mosque… There is no country in the world more beautiful than Turkey.”

Murat Sungurlu, the chairman of the Turkish-Chinese Industrialists and Businessmen’s Association (TÜÇSİAD), was also in attendance. In his speech he said he wishes for the event to be held for several more years and hopes that it improves commercial and friendly ties between the two countries.

Turkish Consul General in Shanghai Deniz Eke, speaking at the event, said Chinese businessmen now have the opportunity to know Turkey a little better, helping to improve commercial relationships between the two countries.

On the other side, there is one very important thing that Indonesia must avoid. The Turkish government has been inching ever closer to becoming an Islamist nation, abandoning its secularity that has acted as the foundation of modern Turkey until now. The government’s power is also getting increasingly concentrated in the hands of the Turkish President Recep Tayyip Erdoğan.

A kindergarten built through the efforts of Turkish entrepreneurs in Turkmenistan was opened by Prime Minister Recep Tayyip Erdoğan and Turkmen President Gurbanguli Berdimuhammedov at a ceremony on Saturday. The 320-student kindergarten was constructed by Turkish contractor Sehil. Erdoğan, who was on an official visit to the country, delivered a speech at the ceremony. “We […]

Alamo Plaza was alive with music and food, Saturday, for the annual Turkish Festival. The free event celebrated different aspects of the Turkish culture including folk dance, the performing arts and authentic cuisine. This year’s theme was San Antonio Goes Turkish.