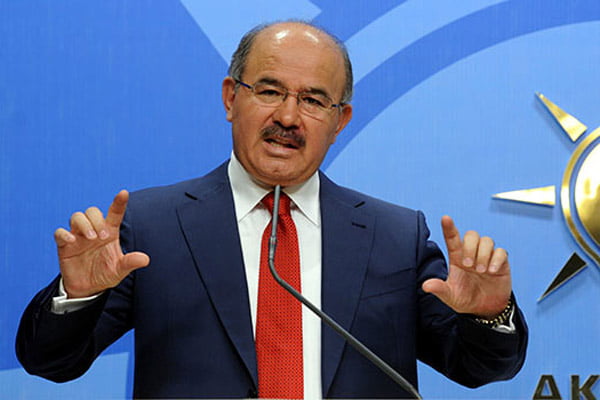 Justice and Development Party (AK Party) Deputy Chairman Hüseyin Çelik on Wednesday confirmed the authenticity of a new document suggesting that the government profiled individuals linked to some religious and faith-based groups, saying the document was leaked to the media by a member or members of the National Intelligence Organization (MİT).

In a recent development on Thursday, however, the Prime Ministry, the National Security Council (MGK) and MİT filed criminal complaints against the Taraf daily for its publication of the document. The contents of this document indicate that the government profiled a large number of individuals until 2013 under a decision made by the MGK nine years before.

Çelik, who is also the AK Party’s spokesperson, claimed that the profiling data was never “acted upon,” meaning that no action was taken against individuals whose activities were monitored by the government. Çelik’s remarks came at a press conference on Wednesday afternoon. Describing these profiling activities as “outrageous,” the deputy chairman said the ruling party had discovered that the document had been leaked to the Taraf daily, which is responsible for the revelations about the AK Party’s profiling activities, by someone inside MİT. However, he stated that efforts are ongoing to find the identity of the leaker or leakers. In some tweets on Thursday, Çelik wrote, in a stated attempt to clarify his remarks of the day before, that the leaked document concerned the profiling activities, not the MGK decision of 2004.

According to the document published by Taraf, those profiled were mostly individuals involved in the Hizmet movement, a faith-based organization inspired by Turkish Islamic scholar Fethullah Gülen. The daily claimed that other religious groups that had voiced criticism or disapproval of government activities were also profiled. This document, dating from 2004, was signed by a number of officials, including Prime Minister Recep Tayyip Erdoğan, then-Foreign Minister Abdullah Gül and then-Justice Minister Çiçek.

The claims of profiling led to a public outcry. Erdoğan has yet to make any remarks on the matter.

On Thursday, Taraf published further documents to refute Çiçek’s claims about the MİT leak. These documents, dated 2005, were prepared to respond to a parliamentary question at the time by a main opposition Republican People’s Party (CHP) deputy about measures the government has taken against “reactionary groups.” In his response, then-AK Party Deputy Chairman Mehmet Ali Şahin said the Prime Ministry Implementation Monitoring and Coordination Council (BUTKK) convened every month to discuss measures against reactionary groups. In addition, read the document, the BUTKK monitored the activities of those groups and prepared detailed reports about them. The document also stated that the BUTKK took “administrative measures” against those groups.

Among the profiled individuals are civil servants, academics at universities, businessmen, lawyers and district governors. Those listed also include individuals who attended private educational institutions, including both regular schools and exam preparation schools, which are “suspected of having links to reactionary activities,” as well as residents of private university dorms owned and run by those institutions.

In yet another confidential document, obtained by Taraf, then-Prime Ministry Undersecretary Mustafa Çetin also responded to the CHP’s parliamentary question about reactionary groups and their activities. According to Çetin, the BUTKK held 29 meetings between January 2003 and July 2005. Monitoring the activities of reactionary groups working against state security and the regime falls within the BUTKK’s remit, read Çetin’s document. Within this scope, the BUTKK can discuss possible measures against reactionary groups, according to Çetin. In addition, Çetin’s document suggests that the government monitored the activities and prep schools of the Hizmet movement. Çetin also noted that the government had no plans to abolish the BUTKK. The council was abolished in 2010.

Other documents published by Taraf on Thursday suggested that many individuals’ activities were monitored on the grounds that they were engaged in anti-regime and reactionary activities. “Two students wearing the [Islamic] headscarf were made to leave school in line with directives from the Education Ministry,” read one government notice. In addition, the notice stated that 89 people working in Quran courses were detained in 2005 and 76 others detained in 2006. In addition, 11 Quran courses were shut down in 2004, while two were closed in 2005 and six in 2006.

Also on Wednesday, Çelik said MİT has a “habit” of profiling people even if its head is changed, and it is hard for the organization to get rid of this habit. “MİT has a database. Information about individuals on whom a check or investigation will be carried out is compiled in this database. This database is shared with [state] institutions upon the request of those institutions. However, this information about individuals that keeps appearing in some media sources has not been shared with any state institution or individual,” he stated.

While admitting the authenticity of the profiling documents, Çelik denied that the AK Party profiled individuals in the country on the basis of their ideological or religious backgrounds. “If you profile your citizens in order to harm them, categorize them or otherize them, then this is outrageous. The AK Party has not been engaged in such activities. It is not possible for us to approve of such activities,” he said, adding that action should be taken against the profilers.

In earlier statements, however, government officials had categorically denied engaging in profiling activities. In a public statement in August, for example, Erdoğan claimed that his government does not have an “art of profiling.” “We do not have the intention to profile. I know that I was profiled [in the past]. I also know that my friends were profiled. But we have never been engaged in such activities. We are against any kind of profiling.”

In addition, Deputy Prime Minister Bülent Arınç promised in September 2010 that people would no longer endure such “profiling scandals.”