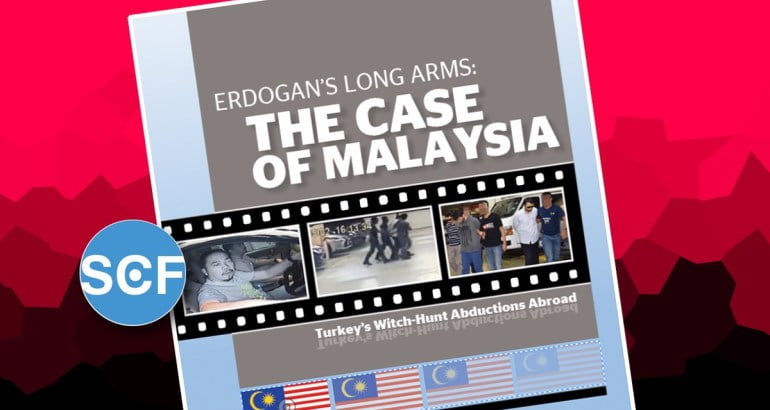 The report which was drawn from a case study on Malaysia, a country with poor record of the law and corrupt politicians exposes how the current government in Turkey led by an authoritarian and oppressive leadership, has been stretching the limits of a sovereign power by whisking away own citizens in a foreign territory.

In contrast to massive spying, intelligence gathering and profiling of critics that at times led to harassment, intimidation, hate crimes and even physical attacks in western liberal democracies that met strong legal and political counter actions by host governments, corrupt and authoritarian regimes like Malaysia appear to be willingly aiding and abetting unlawful actions of Turkish state.

“Malaysian example showed how Turkish President Erdoğan can drag other leaders in his crime syndicate that trumps international human rights law. Corrupt and authoritarian regimes appear to be aiding and abetting Erdoğan’s posse in his illegal manhunt in exchange for political deals and economic incentives,” said Abdullah Bozkurt, the President of SCF.

“Since these people who were turned over to Turkey on false charges will be subjected to torture, abuse and inhuman treatment for simply belonging to a vulnerable social group, Malaysian government will be held accountable for enabling Erdoğan’s crimes against humanity in the future,” he added.

Although critics from all walks of life including Kurds and Alevis were targeted in general in this stigmatizing effort by the Turkish government, members of civic group called the Hizmet (Gülen) movement, which is inspired by US-based Turkish Muslim cleric Fethullah Gülen, have borne the brunt of this major campaign of witch-hunt. Hizmet is a global movement that focuses on science education, volunteerism, community involvement, social work and interfaith and intercultural dialogue.

Turkish embassies, government agencies including intelligence service and non-governmental organizations affiliated with the Justice and Development Party (AKP) government have all involved in profiling and harassment of the members of Gülen movement. Malaysian example represents an extreme case where law-abiding and peaceful people who participated in Gülen’s advocacy of interfaith dialogue efforts were unlawfully detained and abused before extradited to Turkey where they will face further torture, long pre-trial detention and unfair trials.

This persecution is personally sanctioned by Turkey’s autocratic President Recep Tayyip Erdoğan who stated that “no country in the world would be safe for members of the Gülen movement.” He also publicly said “they have no right to life.”

SCF has documented many cases of harassment, abuse, torture unlawful detention and extraordinary rendition in Malaysia in this report, mostly from open sources and some interviewed victims. There have been other cases for which the victims do not want to report incidents for fear of further reprisals by the Turkish or Malaysian governments.

SCF calls on Malaysian government to halt its dirty bidding on behalf of increasingly isolated and growingly repressive Turkish government led by Erdoğan, protect Turkish expats from reprisals, respect to the rule of law, and comply with its international obligations under the human rights law.