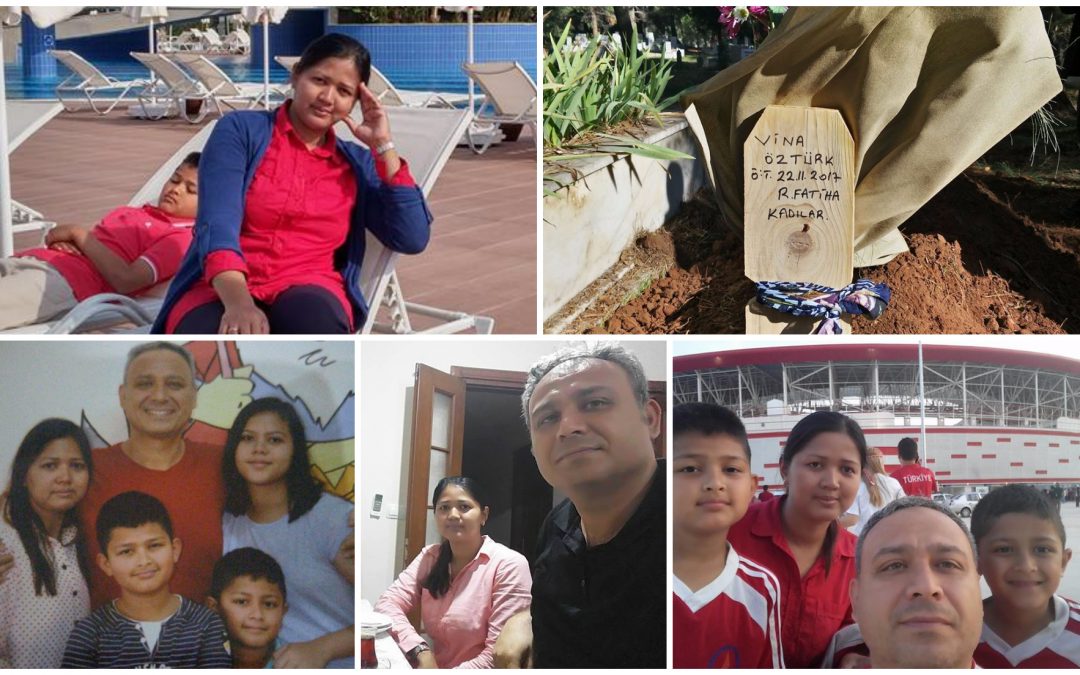 Engin was the sole breadwinner of the Öztürk family until he was jailed in an Antalya prison 15 months ago. A day after Engin was denied request to be released pending trial, Vina suffered a heart attack that left her in intensive care for days.

A former employee of the International Antalya University, which was closed by the government over Gulen ties, Engin says that the court rejected to release him on Nov 16, that Vina (Rana) had a heart attack on the 17th and that he was released on Nov 20 evening only to learn that his wife died at the hospital.

“I have never imagined that my first post after being released would be so hard. everyone who knows me would strongly reject the idea that I could be related with any kind of terrorism. I have tried to influence my students (a.k.a. my children), my friends and my relatives for love, tolerance, mutual understanding and peace throughout my entire life. However, I have been in prison for the last 15.5 months, accused of being a terrorist, before just being released the monday before. the reason that I was released was the sudden disease of my late and beloved wife Vina Ozturk as most of you are aware of. I was put on trial on Nov 16th, Thursday and I was really expecting to be released because of my innocence. However, the court has decided the other way. Friday 17th, she had a sudden health problem and has been rushed to hospital, receiving CPR for 90 full minutes. Although after 45 minutes of CPR, an individual is pronounced dead, the doctors and the medical team has done their best to keep her alive. I have learned all these when I was released Monday 21st in the evening time. She was unconscious and could not see me or talk to me for a last time. Her cerebral death was announced on Tuesday 22nd, and we have decided to donate her organs, thanks to the bravest female alive, Ebru Nisa, my daughter. She has been buried Thursday 23rd in my hometown, Denizli, next to my grandfather and grandmother. I WOULD HEARTFULLY LIKE TO THANK ANYBODY WHO HAS HEARD WHAT HAS HAPPENED IN LAST TWO WEEKS AND TRIED TO HELP, WISH CONDOLENCES, OR TRIED TO BE WITH OUR SIDE IN THE MOST DIFFICULT TIMES IN ANY WAY THEY COULD. MAY ALLAH NOT TRY YOU WITH THESE EXPERIENCES. The life had to start over, and we did so. The kids have started to school, and we will be in Antalya until the uncertainties get resolved. THANK YOU FOR BEING WITH US,” Engin wrote on his Facebook account.

Turkish government accuses Gulen movement of masterminding the July 15, 2016 coup attempt and calls it a terrorist group while the latter denies the accusations. Some 130,000 people were detained and 60,000 of them were arrested and put in pretrial detention since the summer of 2016. Meanwhile, at least 3,008 schools, dormitories and universities were shut down over Gulen links.

It is wrong and harmful to present Gulen Movement or create a picture that will make the Movement look as if it gets along and tries to collaborate with, or in need of help from PKK. I believe that Gulen movement will not fall into such a trap.