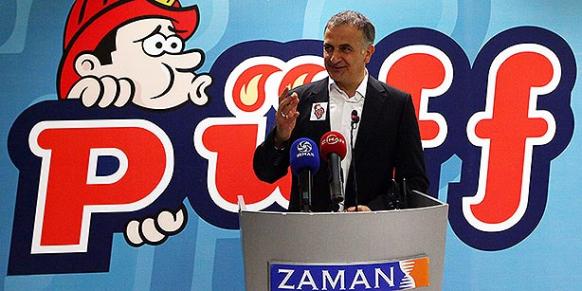 The magazine, Püff, will be published as a supplement inside Zaman on Mondays. A party was held at the headquarters of the Zaman daily on Friday evening to launch the magazine.

The editor-in-chief of the magazine, Abdullah Yavuz Altun, is sure about its success, saying, “Even those who don’t read Zaman will not hesitate to look at its satire magazine.”

Altun said the Püff team was not disheartened by the Dec. 14 operation which led to the detention of Zaman Editor-in-Chief Ekrem Dumanlı, a top executive of Samanyolu TV and producers, scriptwriters and directors, noting that they even had an editorial meeting when Dumanlı was in police custody.

The Dec. 14 operation was the culmination of a long battle launched by the Justice and Development Party (AK Party) government and President Recep Tayyip Erdoğan against the faith-based Hizmet movement, which has been ongoing since a corruption probe in which senior government members and Erdoğan himself were implicated went public on Dec.17, 2013. Then-Prime Minister Erdoğan accused the Hizmet movement of masterminding the probe in an attempt to topple his government. Hizmet strongly denies the accusations.

Zaman and Samanyolu TV are affiliated with the Hizmet movement.

Hasan Sutay, a member of the Püff team, said if another newspaper had been subjected to the Dec. 14 operation, its magazine would perhaps have dissolved or not been able to work due to feelings of discouragement.

“We don’t have any such problems and continue to work as if nothing has happened,” he said.

Speaking about the magazine’s publication policy, he said the magazine will not only have a critical perspective toward politics but toward all fields of life.
“Since we will not have solely a political line, people will understand in time that this is not a project to ‘overthrow the government.’ … Satire is about life, politics is just a variation of that,” Altun said.

Ahmet Turan Alkan, a longtime Zaman daily columnist who is known to make much use of satire in his articles, is also among the Püff’s contributors. He said the magazine has not been launched to make fun of certain people.

“What we need is to take a mirror and look at our faces. We need to practice self-criticism and see that the sharp object in our hands will also damage ourselves. … If you can make a healthy criticism of yourself, you will be strong and live long. You will be flexible. What the Hizmet movement needs most now is to gain this flexibility,” Alkan explained.

According to the veteran columnist, the launch of a satirical magazine by Zaman will change the way the Hizmet movement looks at things and make it more democratic, while he explains that satire requires self-criticism and it is not possible to be a real democrat only through criticizing others.

With regards to whether the magazine will have any boundaries it will not cross, Sutay said there should certainly be “red lines,” and even if the magazine oversteps some of them, their readers will warn them about this; while Altun said the magazine will act in accordance with common values and morals.

The launch of Püff comes in a period when an armed attack on the French satire magazine Charlie Hebdo resulted in the killing of the magazine’s 10 staff members in addition to two policemen.

Four of the magazine’s world-renowned cartoonists and one of its editors were among those killed. The magazine had been threatened by radical Islamists for drawing caricatures of the Prophet Muhammad.

“When our plans were under way to launch a satire magazine, I happened to go to Paris and one of the first things I did there was to get a copy of Charlie Hebdo. In Europe, criticism and satire are more aggressive when compared to here, there is not anything that is holy there. Morals are kind of a taboo. Charlie Hebdo’s cartoons about our prophet attracted a lot of negative reactions. There were similarly humiliating cartoons in the same magazine depicting Jesus and Moses. That’s why some European commentators did not avoid harshly criticizing Charlie Hebdo for this,” said Altun, adding however, that the Charlie Hebdo event helped Püff’s team understand the importance of freedom as they were about to launch a satirical magazine.

He said everyone does not have to like Charlie Hebdo’s publication policy, saying, “Without making excuses, we should stand by Charlie Hebdo and raise our voice against restriction of freedom of expression and the brutal massacre,” he said.